As feared last week, Mark Eaton is indeed out for the season with Islanders Hip, joining a list of patients who will miss a half season or more including Mark Streit, Kyle Okposo, Trent Hunter, Mike Mottau and probably someone else I'm forgetting. Among the defense in tonight's lineup, unless Radek Martinek makes a sudden return [Update: Maybe.], Andrew MacDonald -- who earlier missed 15 games with a broken bone -- will be the guy with the most 2010-11 games played.

At least tonight's opponent isn't any good or anything.

If we're lucky though, the Isles won't be sans-Frans, Fransi-capped, short-Fransed, down-a-Dane, dis-Daned -- or whatever the parlance of your choice. When If Jon Sim clears waivers today, Katie Strang at Newsday reports (and for you diaspora, it is again [$5 please], though we thank the sponsor who made it viewable for all this holiday season) he'll be assigned to Bridgeport. If that's indeed the case and it's not just creating flexibility for later reassignment, then that tells me Jeremy Colliton has leaped him on the depth chart, and maybe Frans is ready to go. Both would be welcome. [**UPDATE**: Alas, we're not lucky, not like that: Rhett Rakhshani is called up; Frans is still out.]

Putting my whining about injuries aside, the Isles are coming off a promising 3-2 Western trip, and they are still 8-3-1 in their last 12. There's some luck and some withstanding-onslaughts during that run, but they've found a way to take some impressive scalps -- and maybe more importantly, despite being at the non-Devils bottom of the league they're playing like they have something achievable to prove.

Luck can beat skill. Skill beats belief. But belief doesn't hurt. Has there been a shift in the team that's fed recent success? Here's the coach's theory:

"Their success has to do with a combination of things, but I think now it’s within that room," Capuano said. "It’s the belief that they have that we’re down 2-0 in Colorado and came back. We beat some good hockey teams. So I think it’s a credit to those guys and how they’re playing. I can see it on the bench too. Guys are getting a little antsy with each other now, which is a good thing because they’re holding themselves accountable."

Tonight they'll need all that, because... 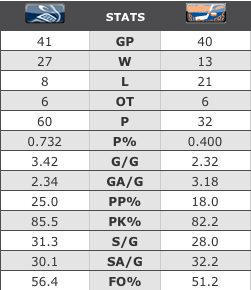 So you're sayin' there's a chance?!

Because you asked, Tambellini is 1 for 2 in shootouts (the Canucks, like the Isles, have only been in four and are 1-3).

Thanks again to everyone, especially our newer members, participating in the FIG (First Islanders Goal) pick pools. Especially for the new members, some rules to reiterate:

1) You MUST reply to the first post, or your choice may be overlooked and will not count.
2) You MUST select both a player and a time. If you don't select a time, and anyone else chooses the same player as you, they get preference.
3) Easiest way to achieve the above is to put both the player name and time in the subject line, and then put other snarky or explanatory comments in the body of the comment.
4) Picks left after the opening faceoff are invalid and subject to public shaming.

As you can imagine, it gets hairy keeping track when FIG picks are all over the place. Be even better if the first person to go a-figging would post a comment titled FIG PICKS - REPLY HERE, and then reply to that one with their pick, to begin the comment tree.

And now, as listed yesterday, your leaders: