Note: Awful Hockey Card Art is a periodic and not-so-Islanders-related summer series that commemorates the time before Photoshop, when hockey card designers got a little too carried away and we kids had to deal with the sorry results.

This is Glenn "Chico" Resch, the Stanley Cup-winning former Islander. He was actually a New Jersey Devil when this photo was taken during the 1985-86 season, but that sure isn't a Devils uniform they have him dressed up in. He was traded to the Flyers late that year -- the same year Pelle Lindbergh died -- but no doubt Topps/O-Pee-Chee couldn't be bothered to get an updated photo, and apparently slapping "Now With Team X" was reserved only for special cases like Clark Gillies (Would you dare paint on Gillies? Didn't think so.), presumably when the in-house MS Paint expert was busy.

No, the card companies had a different, brilliant solution: We'll just draw his new uniform on! Worse, we'll ignore that by this point the Flyers had gone to a black trim line between the white and orange (a detail I always liked)! So Resch is depicted in a kindergartner's rendition of a uniform he never wore. None of which, sadly, distracts from that epic hair, which we cannot pin (can we?) on OPC's art department.

As for why this future Devils color man looks like Random Philly Joe in an orange t-shirt instead of an athletic goalie: The majority of hockey card shots in those days were snapped during warmups. So while sometimes they'd play off a guy skating drills as if he was doing something noteworthy in action, goalies were constantly shot in this way, with just a maskless portrait and a vacant scowl. Pat Riggin as a Capital and Don Beaupre as a North Star come to mind from this era: Goalies photographed ... doing nothing, looking unhappy. (Who can forget this version of Kelly Hrudey?) Totally unsatisfying for the kid who wanted to see a goalie making a kick save, mask on.

Next, we have an incident of awful hockey card art that may even be worse -- particularly to those sympathetic to the days of the Whalers: 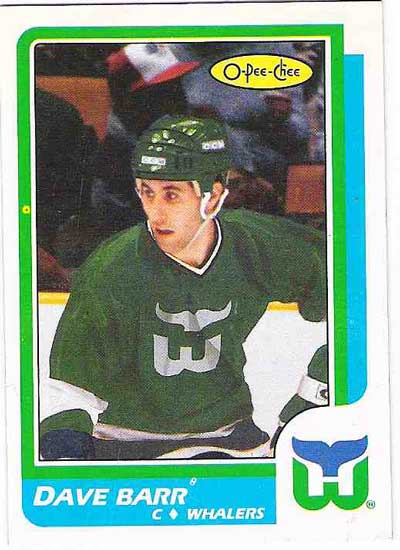 This is Dave Barr. He played for seven NHL teams during his career. He actually only played 30 games total as a Whaler -- all during 1986-87, a year when he was traded twice, first from the Blues to Hartford just two games into the season, then to the Red Wings 37 games before the season was up.

So rather than take the existing photo of Barr as a Blue and slapping "Now With Whalers" on it, the hockey card powers that be decided to paint his full torso in green, shine up his CCM helmet with a green varnish and light reflections (nice job on that one, actually), color his glove green, draw some shaky stripes on the hem and ... oh ... oh my ... they tried to draw a wrinkled "HW" Whaler logo, too.

As you can see when comparing the Whalers "crest" on Barr's chest with the official version at the bottom of the card, they completely disemboweled the logo so that the negative space "H" in the logo is hardly recognizable. (They always did this; in attempt to show a crest in action, they'd warp it or turn it nearly upside down.)

Though some effort was made to capture the sweet Whale tail's curves, the "W" is almost an after-thought and it's what ultimately sends this artistic house of cards crashing down. As a final insult, they didn't bother trying to replicate the blue trim that went around the Whalers' white road crest. (This was the day when men were men and the road team wore their colors.)

For kids who collected hockey cards during this pre-Web era -- and the 1986-87 series may have been the worst when it comes to pre-Photoshop disasters -- we had to deal with case after case of this. Where you opened a pack hoping to see a favorite player in action, or perhaps cling to his last card as a member of your team, instead you got what happens when someone in a position of power goes crazy with a crayon. And that is why years later we shall not let it be forgotten, this scourge of Awful Hockey Card Art.