Getting Drafty - Will the New Scandinavian Transfer Agreements Affect the Islander's Draft Strategy?

Share All sharing options for: Getting Drafty - Will the New Scandinavian Transfer Agreements Affect the Islander's Draft Strategy?

I thought I would take a look at if there will be any effect on the Islander's draft strategy now that both Finland and Sweden have transfer agreements in place with the NHL. In the past without the transfer agreements, many NHL teams have used late round draft picks to take Scandinavian prospects thinking that they would hold onto their rights indefinitely. With the transfer agreements in place this is no longer the case. While specifics aren't published by either side, enough details are now known that we can get a good idea on how this will affect current teams prospects and individual teams' draft strategies. 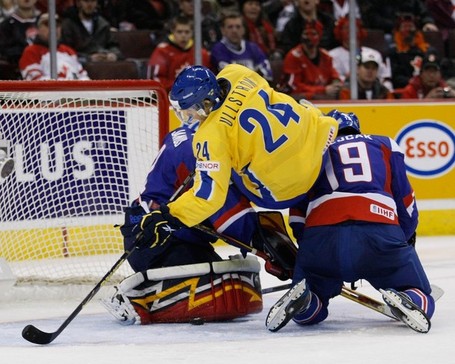 What we do know is that NHL teams now hold the exclusive rights for two years after the draft provided they offer the player a Bona-Fide offer during the first off season. If the NHL team does sign a player they owe the Swedish/Finnish team somewhere in the neighborhood of $200,000-$250,000 transfer fee. The players are allowed to be loaned back to the original club for a year after signing their entry level.

What does all this mean? Well, for one a team has to be pretty sold on a Scandinavian player to draft him now. Not only do they think he will be North American ready in two years but also worth the investment of the transfer fee. No longer will teams be taking fliers on random prospects in the late rounds hoping they develop into the next Henrik Zetterberg. I suggest checking out Derek Zona's post over at Copper and Blue from last month for some details on the Finnish agreement if you want to delve deeper into the rules regarding already drafted prospects playing in Scandinavia.

After the jump, I will take a look at the Isles late round draft history under the Snow-Jankowski regime and the Scandinavian trends in general post lockout.

For the Islanders' draft history I will use the last three drafts, 2007-2009. I will forget the Niel Smith/Mike Milbury post-lockout drafts since I think the draft strategy has changed with the new regime (although it doesn't take a genius to figure that out).

As you can see the Islanders didn't even draft that many prospects from Europe in the Snow/Jankowski era. Of the four Scandinavian prospects they drafted, one (Jyri Niemi) played in North America. They have not drafted a Scandinavian prospect in rounds 5-7. The lowest drafted Scandinavian player was David Ullstrom in the 4th round of 2008. Ironically the one player of the four not offered an entry-level contract or signed with the organization is Niemi, the one that played in the WHL. Also of note are the three Russians drafted. Max Gratchev played in the OHL and was released from the organization prior to last season. He spent this season bouncing between the ECHL and the AHL in the Senator's organization. Anton Klementyev was signed right after he was drafted and played in Bridgeport this past year. The other, some dude named Petrov, is currently playing in Russia although possibly not for long.

So will the new agreements affect the Isles draft strategy? It sure doesn't look like it. Even when drafting non-North American players, Snow and Jankowski prefer those who will be playing in North America the season after the draft. Of the twenty players drafted in the last three years, only Petrov, Ullstrom and Anders Nilsson did not play in North America the season following the draft. I guess this makes European scout Veli-Pekka Kautonen's job fairly easy.

As for the trends across the NHL, lets take a look at the post lockout drafts:

The reason I added the Danes and Norwegians is the young prospects from these two countries tend to play in the Swedish or Finnish developmental and pro leagues (See Frans Nielsen's tenure at Frolunda and Jonas Holos at Farjestad).

Sweden dominated the other three Scandinavian countries in both players drafted (88) and first rounders (15). 48 of the Swedes drafted were in the 4th round or later meaning over half of the Swedes drafted since the lockout were in the later rounds.The numbers for the Finns are a bit more surprising: 34 of the 44 Finnish players were drafted in the 4th round or later. In 2009, Mikko Koskinen was the only Finn drafted above the 4th round. The only Norwegian drafted before the 6th round was the very un-Norwegian named and Colorado College bound Scott Winkler in the 3rd round by Dallas. Two Danes were selected in the 1st round, Lars Eller and Mikkel Bodker with Bodker playing in the OHL. The other four were drafted in the fourth round or later.

So what does this mean for the 2010 draft? Well I don't think it will affect the higher rated prospects like a Mikael Grandlund as teams that would select a player that they would be willing to invest the money into the transfer fee. As for the more marginal prospects, like a Sondre Olden or a Lars Volden I think it will help them in the end. If a team takes them and in the end no longer thinks they are a prospect, the player will have the freedom if they want to go with another organization if they want to come to North America. As for draft strategies, I think teams will tend to take more North Americans now in the later stages, especially those headed for the NCAA in order to keep player rights longer. If a late round pick makes it to the NHL, they tend to be late bloomers or project picks that need time to develop, not helpful for NHL teams faced with a time limit on a player's exclusive rights.

So I don't think the two new transfer agreements will affect the Islanders draft strategy. Snow and Jankowski have shown that they tend to go with late blooming CHLers like Matt Martin and Justin DiBenedetto or NCAA bound players like Blake Kessell and Anders Lee with their later picks rather than take fliers on Europeans. Outside of Ullstrom and Nilsson, the Scandinavians they have picked played in North America the season following the draft whether it was in the CHL or AHL. Even with the other Europeans they've drafted, only Petrov has played for a prolonged time in his home country. It will affect other NHL teams (I'm looking at you Detroit) and while I think there will be a short term drop off in Scandinavians drafted. In the long term I think teams will tend to draft more mature Scandinavians (Like the Isles did with Koskinen this past year) as the development track of a 20 year old is a bit easier to track than that of an 18 year old.