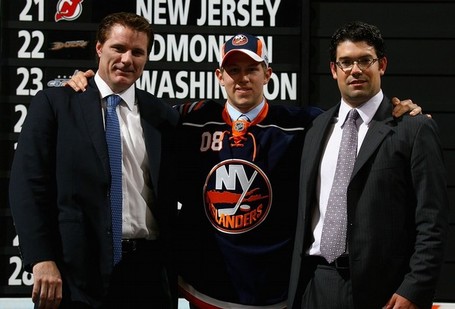 I have been giving thought to what I think Garth's Draft Day strategies should be and, while the wheels are still churning, I have come to some conclusions.

As most of us by far seem to agree, I have decided that our first choice for the #5 pick should be Erik Gudbranson (see first video after the jump). The only question in that regard is as to whether Garth should sit tight and hope that Erik comes to him at #5 or whether he should spend, say the #58 or #65 picks to move up to #3 as Florida has expressed a willingness to trade down.

Even though some pundits have Florida picking Gudbranson, I believe the Cats will pick Fowler as he is more clearly NHL ready and will provide an immediate boost to their woeful PP. I also believe that Columbus needs another big time scorer and will go with Connolly, who seems to have done well at the Combine. Still standing pat is risky and I would not blame Garth for moving up if he wants Erik.

I still like Nino a lot, but maybe the Isles' focus on Draft Day should be to enhance the bird in hand. The Isles have a top six PF candidate who they are trying to bring over. Maybe they should draft forwards who he will feel comfortable playing with and whose selection might influence him to buy out his contract and Anton Volchenkov to hear the balalaikas ringing out and the rubles jingling and get them both to the Island.

One guy I am sure that I would like the Isles to expend a second round pick on is Ivan Telegin (SEE LAST VIDEO). THN has him at 6'2", 194 lbs, so I suspect that he will fill out to about KP's size. The two of them would make rather an imposing presence on either a second or third line. He is playing for Saginaw and has not had any issues there.

Question is: who should their linemate at LW be? Kirill Kabanov would be interesting but risky (see second video). I have seen differing views on the web, but it seems clear that the troubled winger has burnt his bridges in Russia and possibly in Moncton as well. His comments at the Combine may reflect a genuinely chastened spirit and a player who will give his all for the team that drafts him. It might be worthwhile to spend a pick on him and also to sign Enver Lisin. If they work out that will be a bonus but the real goals are luring Petrov and Volchenkov here.

Another possibility would be trading for a first round pick and skillfully using assets to move up and get Nino or perhaps Burmistrov in addition to Erik. Might be tough to do though.

Which Draft Day strategy do you like the best?