Islanders Gameday: Escorting Flyers to the playoffs since 2008

Share All sharing options for: Islanders Gameday: Escorting Flyers to the playoffs since 2008 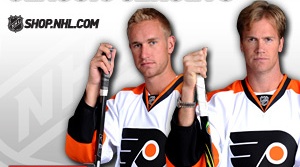 This Is My "Me Be Tough" Face:
One of these guys is a dangerous weapon, one of these guys uses his stick as a weapon, earning him the dishonor of "NHL's dirtiest player" as voted by his peers.

In your mind, have the Islanders played a game this season, any game, that you would call a "must-win?"

Their playoff prospects were always a sort of meddling chance not killed by any one, but rather one thousand, cuts. (Or, if you prefer, killed by "rebuild/cheapness-related inadequacies.") Before the Olympics, they needed to rebound from their late January swoon to be in striking distance once GM Place transformed into Cleansed for Olympics Place. Didn't happen.

The pre-break blown-lead loss in Ottawa wasn't fatal, but it made their direction pretty irreversible (barring some sort of collective stink by Eastern bubble teams that, as it turns out, actually happened).

But even factoring in the persistent ennui that has characterized the playoff push by Philadelphia, Boston, Montreal, Atlanta and the Rangers, the post-Olympic Islanders never found that "Whoa, they're hot!" form they needed to reclaim bubble-icious credentials.

So if you grant all of that, I'm left to consider: Which two individual games did I want most this season? They were both this week. The first one turned a 2-0 lead into a 4-3 loss. The second one is tonight, against a foe the Isles haven't beaten in 15 tries.

Several of us around here tend to note that the 2007-08 and 2008-09 editions of the Flyers are not playoff teams if they do not run the OT/SO-aided table (or nearly so) on the Islanders. The 2009-10 edition is one game away from earning itself that esteemed distinction. (Philly can still make the playoffs with a loss tonight, but why start now?)

Essentially, if the Flyers only go .500 against the Isles in any year, they don't get in.

So yes, I want this win. I want this more than any remaining game on the schedule and more than any from the last month -- even Tuesday's Rangers game which, let's face it, only conceded two more points to damage the Smurfs' own lottery dreams. I want it to end the winless streak against the Flyers, but also to entertain us with the anxiety that afflicts a cap-ceiling team that is in danger of missing the playoffs after failing, for the 20th consecutive year, to address its goaltending.

Because most of these desires are impure and would turn your average nun red, I don't expect to get what I want. But for a few hours, before Chris Pronger does a Flyer thing and gets away with it (because the only thing more automatic than a Flyers suspension in Colin Campbell's league is an unpunished offense perpetrated against an Islander), I can hope for the best.

But in all honesty, four of the games this year were one-goal games, some closer than others. The streak is due to end sometime and it won't be a big shock when it does.

Rosteral Manoeuvres in the Dark

And speaking of Campbell's wheel of justice, Dan "Smarter than Colton Orr, but Not by Much" Carcillo is out thanks to a two-game suspension for getting his stick up on David Clarkson during an altercation. My initial reaction was ... well, we can't call it empathy for the dude, but I thought he'd been hard done by. It was likely "accidental."

But then I got a grip and remembered the league allows fights and aggression, but it does not allow your stick to be involved in your aggression under any circumstances -- accidental or otherwise. In short, except when following through on a shot, you are always responsible for your stick, even more so than your elbows. You are allowed a gun, and you are allowed to hunt, but if you wave your gun in an altercation and it "accidentally" goes off, you're responsible for the result.

(And the fact that you can try to pummel someone with your fists with no disciplinary consequence -- again, Carcillo excepted in Campbell's NHL -- yet cannot inadvertently get your stick involved without getting the book thrown at you? Well that's just part of the cognitive dissonance that defines hockey's ambiguous "code" and makes the NHL look absurd to outsiders, and plenty of insiders.)

Goalies: Expect Martin Biron, who has been sharper since he learned he wasn't going anywhere at the deadline, to start in goal. For the Flyers, it's Brian Boucher backed up by the latest guy picked up off the street.

That Guy: Underrated pre-deadline acquisition Ville Leino is getting his chance with the Flyers.

Prospect Stuff: Jared Spurgeon's season and junior career has ended in a Game 7.

Did you see old friend Jason Blake had a banner night, with five points (1G, 4A) to make Colorado fans even more nervous than before?

Also last night: Carolina beat Montreal and Tampa Bay beat Pittsburgh, both hurting their lottery efforts and making the 8th-seed race more interesting. Dallas whaled on San Jose and Evgeni Nabokov (5 goals on 21 shots), so the nervousness quotient among NHL fanbases is at an all-time high right now. Half the league's playoff hopefuls are either facing goalie issues or playoff bubble issues. It's awesome.

And here's a shock: A TSN guy with a convoluted formula rates the Islanders blueline as 28th in the league. Yes, even with Bruno Gervais, Dylan Reese and Mark Flood in the mix, they still beat out Edmonton and Tampa Bay's blueline (really?!), in his estimation.