Breaking Down and Analyzing the Islanders Rebuild

Share All sharing options for: Breaking Down and Analyzing the Islanders Rebuild

It's said a lot around here how the Mike Milbury era left the Islanders prospect system bare. Even that doesn't do justice for how bad the prospect system was left by the drafts from 2001 to 2005. The cream of the crop from those draft years? Frans Nielsen. The rest of the NHL level talent? Blake Comeau, Bruno Gervais and Chris Campoli. All three are free agents this offseason, and with their struggles it's possible all three may start next season outside of the NHL. The rest of the picks are a mishmash of guys who never left Europe, never competed above the ECHL level or disappeared from the hockey landscape after two or three years.

The importance of the 2006 draft is not just the end of the Milbury era, but the shift of the Islanders draft to more North American players (or those of NA birth as compared to Europeans who might be playing in Canada). This meant not only a longer prospect development timeline, but as a whole the organization has taken the slow but steady approach to a number of draftees. When you look at the 2006 draft, this is just starting to bear fruit for the Islanders.

Obviously you start with Kyle Okposo, the Islanders first rounder who spent a season and a half at Minnesota, a half season at Bridgeport before joining the Islanders full time in 08-09.

Of the next 12 picks though, only 4th rounders Jase Weslosky and Doug Rogers, 5th rounder Kim Johansson, 6th Rounder Stefan Ridderwall and 7th Rounder Troy Mattila are definitely no longer in or part of the Islanders.

With 2006 being a good draft, it also helps to show what kind of damage the complete failure of the drafts leading up to it did to the Islanders in the long term. The Islanders are only just now starting to see the players drafted in the 2nd round and beyond in the NHL. Andrew MacDonald worked his way up after being drafted from his QMJHL team, playing another year in the QMJHL, a year in the ECHL and a year in the AHL before showing what he could do during an emergency call up in the NHL last year.

Even so, you still have two Islanders who are currently Seniors in college from the draft, Shane Sims and Brian Day. This means unless they show up in Bridgeport or Training Camp and blow the doors off of everyone they are probably another year at the earliest from being NHL ready.

Three of the top six points leaders in Bridgeport currently are from this draft: Jesse Joensuu, Rhett Rakhshani and Robin Figren. All three spent time maturing in different ways. Rhett graduated from Denver before joining BP. Joensuu spent two more years in SM-liga before coming to America. Figren finished out his WHL career, played in SEL a year before joining BP.

Another part of the problem with the Islanders system being depleted during Milbury's run, is that the Islanders had very few trade chips from previous drafts. Trading future picks is almost universally worse than trading prospects, because you should have the best information on how your prospects are coming along. Trading draft picks is much akin to playing Russian Roulette.

For example, who is Noah Welch? He was a 2nd round selection of the Penguins in 2001. He spent 4 years at college and after graduating joined the Penguins AHL team. He played a full season in the AHL, and part of the following year in the NHL. The Pens dealt him for Gary Roberts, not a huge trade but one that addressed a few issues that the Pens were having. Welch meanwhile has become nothing more then a borderline NHL/AHL player.

The Pens were able to make this trade because they had the depth in their system to replace Welch, they were able to pinpoint Welch's true value after two years in their system. Roberts was always going to be a short term player for them, but his intangibles were worth much more then anything Welch has since brought to the table. Sometimes when your making a deal, it doesn't have to be huge and splashy. Just pinpoint your teams needs while knowing what you can realistically give up.

The Islanders meanwhile were unable to trade any of their prospects who were drafted outside of the first round from 2001-2005. Ryan O'Marra, Robert Nilsson and the 2007 first rounder were dealt for Ryan Smyth. Petteri Nokelainen was dealt for Ben Walter. Smyth left the Islanders for Free Agency, in what kick-started the Islanders' internal decision to rebuild. Walter is now playing in Europe after two years at Bridgeport.

This has left the Islanders in a tight situation, as they don't want to trade future draft picks while rebuilding the team, but they are unable to trade prospects who they realize have a limited potential. Had they drafted better in the earlier part of the decade, you would see them starting to move out some of the older prospects or guys at positions in which they have too much depth, for pieces that either help the current team or at the very least future picks.

The Penguins and Blackhawks won the Cup the last two years with rosters made up of players drafted between 2000 and 2005. Of course the Blackhawks have Jonathon Toews and Patrick Kane who were part of the 06 and 07 draft respectfully, but they are the only players from the 06 draft and beyond on the team. Jack Skille, Chicago's 1st round pick in 05, only just made the Blackhawks full time this season.

The Penguins meanwhile only have one player on their roster from the 06 draft and beyond, Jordan Staal. He was their 06 first round pick and has had growing pains along the way in the NHL. When people talk about the Penguins it's about Sidney Crosby, Evgeni Malkin and Marc-Andre Fleury. But you can't win without depth, and the Pens drafts from 00 to 05 are full of players who are hitting triple digits games played in the NHL now. Guys like Kristopher Letang (3rd Round 05) Alex Goligoski (2rd Round 04) Maxime Talbot (8th Round 02) among others.

Time and again though the Islanders from 00 to 05 (and really from 96 to 05) found a way to fumble draft pick after draft pick. That's especially true of picks outside of the first round. Chris Campoli and Bruno Gervais are late round gems who should help even a bad team depth wise. Instead the Islanders leaned on these late round picks to do too much.

There's a simple reason why so few players the Islanders drafted made any sort of splash in North America. Of the four Islanders still around from those drafts, three of them are from North America. Time and again Islanders draftees never made the trip over from Europe. Or they did and quickly escaped back to Europe for whatever reasons.

29 of 44 possible picks were from Europe. Take away the 05 draft and it's 28 of 37. This isn't a Don Cherry rant against European players, but this was a continual trend of taking players who would never come to North America. Did they interview these players? Did they talk to them before drafting them? At the very least when you take a North American player, even if you don't sign them you can keep an eye on them. The best example of this lately was the Islanders bringing back former draftees Jeremy Colliton and Wes O'Neil when Bridgeport was struggling with depth.

The Isles Rebuild vs. Other Recent Rebuilds 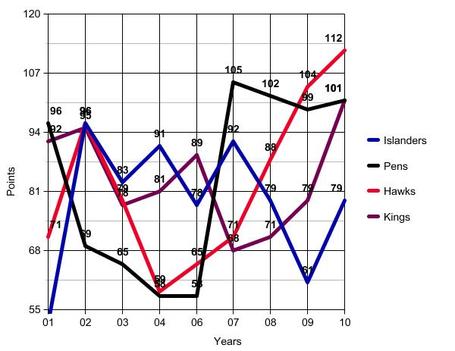 Shockingly in 2002 the Islanders, Kings and Blackhawks all finished around 96 points, with the Penguins finishing the previous season at 96. The recent success in Pittsburgh has led people to forget how long they were bad, finishing for 4 straight seasons below 70 points. While the Penguins struggled the Islanders were having some of their best seasons since the early '90s.

When all three teams hit their lowest point total of the decade, they were teams with a lot of young players. Unfortunately for the Islanders their worst season wasn't a sign of a young team struggling. Instead it was a mismatched team made of spare parts from around the league. The Islanders have continued to get younger since 09, but that means the team and fans continue to struggle through the growing pains.

Why Tomorrow is Promising

It seems like the Islanders fanbase is on the verge of open revolt, and for good reason. I broke it down once, and on three different occasions Milbury decided to "restart" the rebuild. On top of that the original Muller trade by Maloney was another rebuilding beginning. It doesn't help either that the Islanders haven't won a playoff series since 1993. But the Islanders now are paying for the success at the beginning of the decade. It's a cruel irony that seeing Ottawa get to the Cup Finals with the Islanders spare parts wasn't enough. Now we have to struggle through more bad seasons which we should have seen enough of already.

This offseason there are going to be a lot of questions answered. With Moulson, Okposo, Bailey, Grabner, Schremp, Joensuu, Comeau, Parenteau, Wisniewski, Martinek, Jurcina, among a handful of other older vets all facing free agency, we'll get to see how willing the Islanders are to open the wallet. Except for Wiz, most of the FAs should be easy to bring back with possible raises for some of them. But if the Islanders can't find a way to bring back Moulson, Okposo or Bailey then the real questions of the future of the franchise will have to be brought up.

Otherwise Garth Snow is doing everything right. Even the Europeans he has drafted have proven to be more than willing to come to America to play. The Islanders prospect system is looking loaded with talent, and Snow isn't setting unrealistic goals out there that need to be met or else. As players from the 06 and beyond drafts continue to mature, every year should be an improvement for the Islanders.

There's no reason to believe that Snow doesn't have the best in mind for the Islanders. In the past there were crazy roster moves that were huge warning signs (Dumont for Nabokov? Kasparaitis for Smoliniski? Waiving Straka?) of the long term struggles the team would face. The worst move Snow has made so far was the trade for Ryan Smyth, which isn't looking bad in hindsight.

Although it looks like the rebuild is getting nowhere, it's clear that it has only just begun. There's a lot of spare parts on the team right now, but in the long run more and more Isles Draftees should take over those spots. We're already seeing it as guys like Travis Hamonic and Matt Martin have shined well enough this season to grab full time spots. The talent is there, it's just going to take time. To give up all hope now, when the organization is finally dedicated to building the team the right now, would be like not watching the end of Return of the King because your protesting Fellowship of the Ring.