Share All sharing options for: Islanders Gameday: Life without Wisniewski

The Islanders pulled off a nifty buy-low, sell-less-low maneuver by picking up James Wisniewski for a 3rd and then flipping him for a 2nd and change after 34 games (minus two for the Avery suspension). They become the third team to trade Wisniewski while a contract extension was looming. As discussed round and round in comments yesterday, I suspect that has to do with a difference between his expected asking price and his performance: Wisniewski collects points -- playing 5 minutes per game on the powerplay will do that for you -- but the rest of his game leaves questions.

Under two Islanders coaches this year, Wisniewski was seldom put out against top competition. Even still, his even strength play was often...well "marked by curious decision-making" is how I'd put it. It may have been simply a matter of too much ice time hurting his game (more on that after the jump. With a chart!). That's not to bash Wiz: He obviously brings some things to the table, which is why many (including me) were thrilled to get him from the discount bin a few months ago.

But I confess his talk of wanting to become a top-two guy -- again, dating back three teams now -- made me nervous, as I think that's above his paygrade and, consequently, I wouldn't want him signed at that paygrade on a multi-year deal. I referenced this in that defensive production post earlier this week (ironic that the point of comparison, Montreal, just acquired Wiz): Points are important from the blueline, but guys on the powerplay will get their points simply by being there; check out their even strength totals (Wiz had 8, Radek Martinek had 5 in tougher minutes) for a better perspective.

So needless to say, I'd become increasingly hopeful of a Wisniewski pump-and-dump rather than contract extension before the Feb. 28 trade deadline. But I sure wasn't expecting it this soon. I'm not sure why it happened now versus later -- the emergence of Travis Hamonic, creating 9 NHL D when healthy? Or Montreal pushed for it now? Probably both. I'd mention the possibility of off-ice stuff we'd never hear about, but considering Wiz was given an "A" and was a stand-up guy to media, I doubt there was an issue there.

Either way, the Islanders blueline -- marked by injuries all season long -- is now thinner. Bruno Gervais and Jack Hillen, extra parts whose performance sways like confidence (and the only two Isles blueliners who consistently faced weaker competition than Wiz), now must handle bigger roles, although Wiz's even strength role was rarely that significant. His primary contribution was on the powerplay, and that powerplay (15.5%) was 26th overall in the league. The bar thus isn't that high, but how much this trade hurts the current roster depends entirely on whether they can replace him and improve the PP in his absence.

Wiz is far from a Mark Streit -- and that's not his fault -- but his big shot was a PP threat that must somehow be replaced. Which has many wondering..: There is interest from other teams in Brian Rolston. First, the job falls to Andrew MacDonald, who is no stranger to the role at lower levels. But I do worry about giving A-Mac too much to do. Which reminds me...

Wiz with Too Much Ice Time? 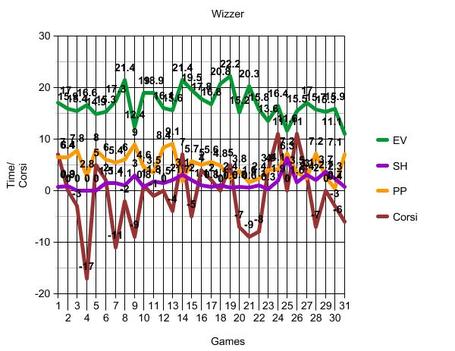 A theory that has followed Wisniewski in multiple stops is that with too much ice time his play suffers. That's really true of just about any defenseman, but of course mid-tier ones suffer when they are deployed like top-tier ones. (But again, he wasn't typically used against the opposition's best.) For fun, the graph above is WebBard's chart of Wiz's games with PP ice time, EV ice time and his Corsi.

I'm not sure it tells us anything conclusively -- even individual game Corsi figures are subject to luck and occasions when you do handle tough assignments or have to babysit weak linemates. But still, charts are fun.

Alas, facing the dynamic Penguins -- and then the Red Wings on New Year's Eve -- is not how I'd like to get that first Wiz-free powerplay look. The Penguins PK is at 87.3% for crying out loud.

The Penguins bring Sidney Crosby's 25-game point streak and lots of Winter Classic hype into this one. In other words, a head of steam, with everything clicking -- even Evgeni Malkin now. Things are so good, they don't have to rely on Mike Comrie to carry the load. (Yes, that was a joke, and yes, Comrie is on the shelf with a relapse of Islanders Hip.)

The only prior meeting this season was quite competitive: The Isles lost in OT after a shady penalty to Milan Jurcina put the Pens on a 4-on-3 powerplay. That was also the game where Kris Letang was wrongly tossed with five-and-a-game for a legal hit on Blake Comeau, so it's not like we can cry about the officiating too much. Well, we can cry, but only because it drags everyone down.

As usual, FIGs shall commence, prizes shall be virtually won...