All-Star Vote: Rally 'Round The Frans!

Share All sharing options for: All-Star Vote: Rally 'Round The Frans!

Editor's Note: This was going to be the Monday mid-day post to coincide with the opening of All-Star Game balloting, but every time WebBard plans a post, some other minor news intervenes.

It's time for NHL All-Star voting. The vote (through Jan. 3) determines who will be the starters at the game. On the official ballot from the Islanders is Mark Streit -- who probably won't play a single game before the actual event -- and John Tavares, because NHL marketing knows who he is.

But there is another way. The write-in.

In 2009, with it being their 100th Anniversary (for what seemed like the 4th year in a row) the Montreal Canadiens hosted the game. They proceeded to stuff the ballot rally their large fan base to attempt to fill every starter's position from the Canadiens. Thankfully they only managed 4 of 6 players in the campaign (yeah, Mike Komisarek!), but it definitely caused some questionable players to make it while deserving players missed it.

Now it's our time. It's time to get someone into the All-Star Game that deserves it but will never get in without your help. That man is practically the Patron Saint of Lighthouse Hockey: Frans Nielsen. 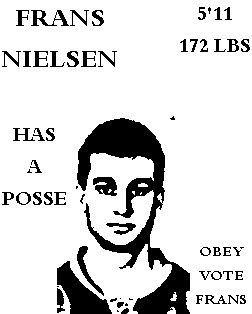 It's time to show the rest of the league that the Islander faithful are back and loud as ever, and fully Danish-enabled. Not only here at Lighthouse Hockey but around the web it's evident there's a buzz among Islanders fans. (Note: Never mind if this week it has to do with a coaching change.)

It's a matter of numbers, right? Montreal is a city of 1.6 million people. If they can get four players voted into the starting lineup, then Long Island (7 million) and New York City (8 million) should be able to get one player voted in. Why just by accident there should be more fans of the Islanders than the Habs.

Who better then Frans Nielsen to be an All-Star? He's the man so good his score goes up to 11. He's so good that his backhand is as close to automatic as it gets in the shootout. Since his first season with the Islanders he is one of three Islanders with over 100 games and a positive +/-. He's Five Foot Nothing (only Jon Sim is shorter by an inch) and a hundred seventy and nothing poinds (smallest on the Islanders). But every night Frans gets called on to take on giants. Without fanfare the great Dane time and time again comes out on top.

Frans has been a workhorse these last few years for the Islanders. He's probably been better defensively then most of our defensemen were. Over the last two seasons Frans has played 130 games for the Islanders, and the Islanders have given up 500 goals in that time, while Frans has only been on ice for 98 even strength goals and 28 PP goals against.

Voting for Frans will not only make Dom giddy, and show the league that the Islanders and their fans are back, but it might even help Frans get some publicity. The pint-sized Dane finished 39th in voting for the Selke (best defensive forward) last year. That's a bigger travesty than Mark Streit's 10th-place finish for the Norris. Pavel Datsyuk has won the Selke three years running and hasn't had nearly the challenges of Frans. Were Joe Thornton, Sidney Crosby and Marian Hossa seriously all better defensive forwards then Frans? Somehow they finished higher than him in voting.

So go out, get on your twitters (#Vote4Frans), get on your facebooks, get on your tin can on strings. I don't care how you do it, but let's get the ball rolling, let's be loud and get Frans Nielsen into the All-Star game (Vote here). It's not just about Lighthouse Hockey either (despite someone's mancrush on Frans), it's about all Islander fans. When the league decided it was going to make "History Will Be Made" ads based on great playoff moments in NHL history, whose record 19 consecutive playoff series victories did they ignore? Whenever someone talks about retraction or relocation, who's one of the first teams mentioned? If we can vote Frans into the starting lineup of one of the biggest NHL games of the year, it will show the NHL and everyone involved that Islanders will not go silently into the night.

If you fail at this simple task, there may be consequences. Be warned: 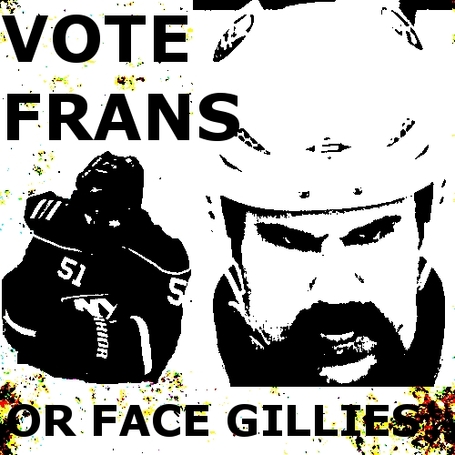