Islanders Gameday: Of coaches, 'toons and The Big Wisniewski

Share All sharing options for: Islanders Gameday: Of coaches, 'toons and The Big Wisniewski

Come for the Ham, Stay for the Brandy: Anaheim Calling and Battle of California

[This is a rather multimedia-heavy post, so I'm forgoing the usual logos at the top. But I make up for it later.] Because I mix my hockey nostalgia with a shameless amount of petty mischief, whenever I think of Ducks coach Randy Carlyle I think first of this moment (He's #25 for the Pens):

And that was just the tying goal -- the goal late in 1982's winner-take-all Game 5 that, had it not been scored by John Tonelli, there would be no Islanders Dynasty. As luck and cruel fate would have it, Carlyle would also be involved on the wrong side of the OT winner just 10 minutes later, as his rejected pinch enabled Tonelli to earn the hardest-working important assist ever recorded in the NHL. I get exhausted every time I watch this next one. God love the original JT:

Bonus Clip Just Because: WebBard's 'History Will Be Made: John Tonelli'

This isn't a takedown of Carlyle nor his play 28 years ago. He was a good NHL defenseman, a Norris winner in 1981 and recognizable by playing helmetless until the end -- chances are he was going to be on the ice (and likely exhausted) whenever the winner was scored. Rather, this is a reflection on the vagaries of fate in hockey.

Carlyle never won a Cup as a player and frankly didn't come close, toiling for the pre-Lemieux Pens and the pre- uh...well eternal-purgatory Jets. In his first year as an NHL coach he made the semifinals and in his second season he won it all was handed Chris Pronger, which combined with Scott Niedermayer* makes a coach look really smart and leads to good things. *Okay, Sammy "Frans of the West" Pahlsson helped.

So four summers ago Carlyle's Ducks were parading the Cup around after his second year. The following summer, Scott Gordon was hired and his Islanders finished in 30th place at the beginning of a lean-budget rebuild, climbing just four spots the following year. Now both are under fire from some fans whose patience has grown thin  -- perhaps Carlyle even more than Gordon, thanks to the nature of the expectations game. But other fans who defend these coaches are pointing to the roster handed to them by their GMs.

Hockey is a crazy game. We know a decent amount about what defines good players and bad players (once they mature and get enough reps), and we know less about what makes good coaches and bad coaches. We know four seasons ago Carlyle was a Cup-winning coach and two weeks ago he was a miserable coach saying really silly things and today the Ducks have climbed back around NHL .500 so maybe he's alright again.

I can't draw cartoons, but Earl Sleek's work makes a blogger want to -- or at least show appreciation by failing paling in comparison. So without much shared franchise history here other than Wisniewski and Travis Green (and Doug Weight, I guess...I think Tony Hrkac too, if I look it up), here's my lame tribute to Sleek, the Wild Wing of 'tooning hockey bloggers: 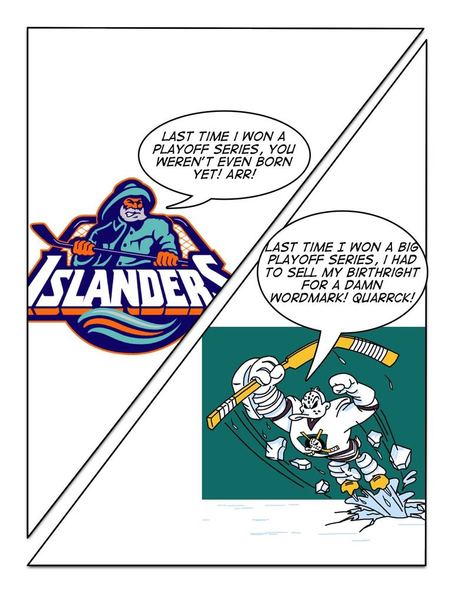 All I could come up with in a pinch.
Plus, "Quarrck!" just makes me giggle as the Duck's reaction to getting axed just before his team wins the Cup.

Speaking of materiel that GMs provide their coaches, James Wisniewski is an Islander because his role-to-cap slot did not fit Bob Murray's budgetary restraints, and his cap space and short term did fit Garth Snow's budgetary and cap floor-clearing needs. After 12 games, as Dennis Green would say, The Wiz is who we thought he was! You wanna crown his ass then crown his (okay-you-get-it). As we all discussed in several posts at the time of this summer's trade, Wisniewski is high-risk, high-reward -- and an instant, welcome upgrade for an Islanders defensive corps that was sub-par for the past two years.

In performance, he's delivered as expected: Some great hits, a loose cannon (if funny) in suspendable moments, some head-scratching decisions on defense (which makes him fit right in). Ducks fans, like Blackhawks fans before them, warned us of this yin-yang, and The Wiz has not disappointed: A team-leading (really? still?) 12 points to go with a minus-12 despite not drawing the toughest minutes. A huge boon to the powerplay, particularly with Mark Streit on the shelf, he's very nice to have at the right price, and this season he's at the right price for the Isles. But extension negotiations, when we come to that bridge, should be interesting.

Tonight he faces his former team and the management that signed-and-shunned him, so you have to imagine he'll want to do something noticeable. Whether that something helps the Islanders, we'll see. Wiz's 8-game suspension as a Duck came after showing his old teammates that he wouldn't allow his new teammates to be pushed around. (Did I mention hockey is crazy? Standing up for your brothers is both an attribute and a flaw.)