The book on Frans Nielsen, and other Danish hockey players: De Brød Isen

Share All sharing options for: The book on Frans Nielsen, and other Danish hockey players: De Brød Isen 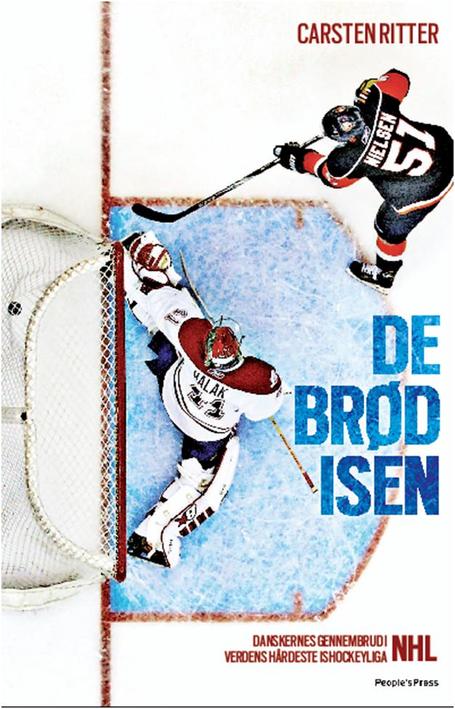 Carsten Ritter is a sportswriter in Denmark with a new book on the recent trend of Danish hockey players reaching the NHL. As he researched De Brød Isen ("Breaking the Ice") last summer, he reached out to me because -- I know this will shock regular readers -- apparently I've written a few good things about Frans Nielsen. (At left is the cover art, featuring what is known around here as the Danish Backhand of Judgment.)

If you are newer to this site, beyond my own campaign the last few years was Lighthouse Hockey reader BenHasna's in-depth "WOWY" FanPosts last summer (particularly Part 1 and Part 2) to objectively measure those "not in the boxscore" Nielsen abilities. (Around this time, David Hanssen also dug into Danish hockey and Nielsen's father's role a little further from our perspective.)

Having watched the majority of Nielsen's 166 NHL games entering the 2010-11 season, I shared with Ritter my thoughts on the Great Dane's progress from an avid but, if I may say so, fairly sober Isles fan's perspective. Unfortunately for most readers here, his book is only available in Danish. But Ritter was kind enough to answer my questions about his project, covering Nielsen specifically but also Danish hockey players in general. Those thoughts and the book's description (in English!) are after the jump.

In 1997 Denmark placed eighth at the B Pool World Championship and was close to return to the C Pool, which they had left six years earlier. Thirteen years later, in 2010, they reached the quarter final in the World Championship against Sweden, having beaten great hockey nations such as Finland, USA and Slovakia to get there. For Denmark, which is a minimal ice hockey nation with only 4000 registered players, this was a huge accomplishment. So what had happened in those thirteen years?

BREAKING THE ICE is the story about Danish hockey players breaking through to the best hockey league in the world, NHL. Very few players’ dream of reaching a career in NHL ever comes true, and since 2006 six Danish players have gone all the way and broken the ice into a world of ice hockey, where pay checks are huge – and expectations even higher.

Danish journalist Carsten Ritter has kept an eye on most of the players since their early years in Denmark and in neighbour country Sweden. Breaking the Ice contains nine portraits of Danish players, including such as Frans Nielsen (New York Islanders), Peter Regin (Ottawa Senators) and Jannik Hansen (Vancouver Canucks). Through stern determination and hard practice they all chased their dream of getting a contract in NHL. Some had to give up their struggle. They also tell their story.

This new generation of players and their astonishing accomplishments in NHL has elevated Danish ice hockey to a whole new level. That is what happened these last thirteen years!

BREAKING THE ICE was released in Denmark on 21st of October by People’s Press.

"Nielsen told me that until he played his first game in NHL, no one in Denmark ever believed he would make it."

LHH: What led you to take on the book project?

Ritter: Kids in Denmark are certainly not born with a hockey stick in their hand. Hockey is a very small sport in Denmark with just 4000 registered players. We have 17 hockey clubs and 23 skating rinks. The Danish Elite League has only 8 teams, and games rarely draw a crowd of more than 2000 people. Only one third of all drafted players get a game in NHL.

Over the last 10 years 10 Danes were drafted and 6 have made it – that’s two thirds. Despite the fact that it’s a small sport, players have become very professional, and these 6 guys have overcome thousands of obstacles along the way. When each of these guys went to play in Sweden in order to develop, someone obviously saw their potential, but they were met with scepticism and disrespect from coaches, fans, teammates, reporters and so on. However it never grew on them. They fought through it.

Frans Nielsen and Peter Regin  are just examples of players working their way from the bench to 4th line and further on to be their teams best players in the Swedish Elite League. And then again coming to North America and do it all over again. Nielsen, who was the first Danish born and raised player in NHL, told me that he felt that until he played his first game in NHL, no one in Denmark ever believed he would make it. These guys have made it without the attention they deserve in Denmark. I want to let Danish sports fans know what an amazing job these players have done.

A few other players had a two-way contract with an NHL. They told me their story as well, and they are living proof of how tough this world is.

Another thing is that hockey players keep surprising me with their attitude. I've interwieved tons of athletes, but never met anyone so humble, fair and polite as hockey players. Frans Nielsen, Peter Regin, Lars Eller among others are probably the kindest and most respectful athletes I've ever met. Danish sports fans doesn't know that, and I find that a shame. Danish sports fans in general think that hockey players are not so smart, and wants to fight all the time. It could not be more wrong, and that's certainly not fair to the sport and those players.

LHH: What if any surprises did you learn while researching this book?

Ritter: I was especially surprised how well respected Frans Nielsen is by people who know him and his accomplishments in the NHL. I was surprised to find out that experts finds him close to a nomination for the Selke Trophy. I've worked on this book for a year, and despite what I said before, it has surprised me how many sports fans in Denmark are having a growing interest in the Danish hockey players. When Denmark reached the quarterfinal in the World Championships in Germany in May, I was used as an expert on TV, trying to explain what had happened, and people came up to me on the streets and showed a true growing interest in what happened, so "the market is expanding rapidly."

LHH: Do you see Denmark's hockey program continuing to grow and improve?

Ritter: Yes, I certainly do see the Danish hockey program expanding and improving. This fall the Danish Hockey Federation paid a lot of interest in getting new kids playing hockey, and it seems that it paid off. The new season is still young, but apparently more than 25 % more kids wants to play hockey this year compared to last year. With only 2000 kids in Denmark playing hockey last year, it's still low numbers, I know that, but no other sport in Denmark can show such a growth.

When it comes to the Danish Elite program, it's the same thing. More young players travels abroad to develop in Sweden and North America, and they keep getting new role models in the players who's made it to the NHL. It also seems that coaches and General Managers are putting more trust into the Danish programs. They are no longer afraid to hire a Dane. If it hadn't been for Frans Nielsen, Peter Regin and the rest of those guys, I don't think Philadelphia would have drafted Oliver Holton Lauridsen last year, nor would Carolina have selected goalie Frederik Andersen in the seventh round this year.

All of this will, I think, keep adding development and improvement to the Danish hockey program. And the 6 Danes with NHL games - Nielsen (Islanders), Regin (Ottawa), Hansen (Vancouver), Eller (Montreal), Boedker (Phoenix) and Larsen (Dallas) are all still young. They haven't reached their potential yet.That's very comforting.

The next thing Danish hockey really needs in order to catch a huge public interest is qualification to the Olympics for the first time ever.

Since barring an English version most of us won't have the chance to see (or at least understand) a copy, I thought it was worth all our while to run all of this info from Ritter. If you like items like this, let me know and I'll try to invest more time in them when the opportunities arise.

Meanwhile, anything stand out to you or surprise you in Ritter's thoughts?