Share All sharing options for: 15 Years Ago: The New York Islanders' tailspin begins... 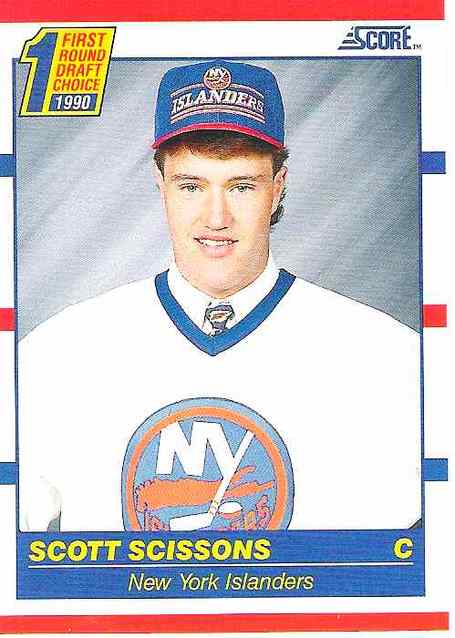 Lighthouse project uncertainty be damned, things are finally looking up for the New York Islanders. There is a healthy coach-GM partnership, the approach of John Tavares fever -- along with some promising youngsters from the last couple of drafts -- and Garth Snow's pledge that we finally won't be Kvasha-ing any of these young assets down the drain like a typical Oleg shift.

Depending how the Lighthouse shakes out, this is either a new dawn for the Islanders, or the beginning of the end.

... Which brings me back to when the bad times began. Depending on who you talk to (and your minimum standard for "bad"), Islanders fans put a few different dates on it. But the year the three-peat-stopping 1993 playoff run past the Penguins was followed by a first-round sweep at the hands of the Cup-bound rival Short Island Smurfs -- a year that would invalidate "Nine-teen-For-ty" -- is a good start. Coming off that double-whammy in 1994, the NHL's first lockout seemed a natural kick in the pants.

This month we'll see several season previews that at least acknowledge the Isles are headed in the right direction.

Fifteen years ago, those previews struck a different, ominous tone...

Say what you will about Mike Milbury -- and lord knows I've said plenty -- I at least concede that he stepped into a hardly ideal situation with the Islanders, considering the ownership and personnel chaos that preceded his arrival and got worse once he was on board. (That said, he was given a healthy 5-year, $3.5 million contract as coach in summer 1995, and by that winter he was picked as GM over Darcy Regier, who went on to do alright in Buffalo. No tears shed for Milbury here.)

I was frightened by many of Milbury's moves at the time -- and disgusted in retrospect. But as when deconstructing a NASA or military disaster, there is a chain of mistakes that look awful in their entirety but more like human error-under-pressure when examined in piecemeal. His early moves were made amid ownership disarray; his later moves were short-term attempts to goose things and win back fans who were chased away by that disarray.

But I'll have a coda on Milbury's version of his Islanders tenure later this week. For now, courtesy of The Hockey News 1994-95 Season Preview, let's flashback to how things looked 15 years ago, when the first NHL lockout was about to delay the start of the season, Al Arbour had just retired for good, longtime assistant Lorne Henning was the new coach, a power forward named Todd Bertuzzi was on the horizon, and 94-point man Pierre Turgeon was still an Islander:

... [Henning] inherits a team with an abundance of talent. It also got an injection of leadership in the form of Ron Sutter and Troy Loney, who were both secured in draft-day trades (for Uwe Krupp and Tom Kurvers, respectively).

There are, however, growing doubts about scoring ace Pierre Turgeon's ability to lead the team. There were even rumors he might be traded in the off-season. And goalie Ron Hextall was not the savior the Islanders anticipated they were getting.

Sutter and Loney were players reaching the end of their usefulness. 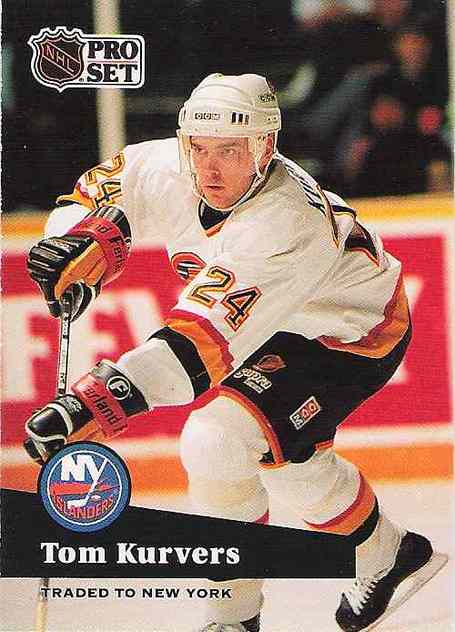 Hextall, I always maintain, was a formerly great goalie caught in between the stand-up and butterfly eras: One look at the 1993 Montreal-Quebec playoff series shows you Patrick Roy excelling via sound butterfly fundamentals, while Hextall is playing it old school -- mixing astounding, acrobatic saves with head-scratching goals that would have been stopped had he simply maintained the sound square positioning we now expect from every butterfly goalie. The Islanders simply got Hextall too late. By the time Hextall adapted his game, in his second stint with the Flyers, he'd improved but was still an old dog learning new tricks.

Turgeon, meanwhile, would play 34 more games with the Islanders, amassing 13-14-27 for them in that lockout-shortened season. Traded in April, he put up 11-9-20 in just 15 games that season with Montreal. The next year: 38-58-96 in 80 games. While the injury bug would hinder him through the rest of his career, he put up 664 more points in 717 games after Don Maloney shipped him off for a pouting two-way ex-Devil who never wanted to be an Islander.

But at least the Islanders blueline was solid, what with Vladimir Malakhov, Darius Kasparaitis and an up-and-coming Bryan McCabe, right?

Well, Malakhov was dealt with Turgeon (although the better Mathieu Schneider came back the other way). Kasparaitis showed up to camp in 1993 overweight, suffered a "sophomore slump" that continued into the lockout year and never quite regained his form. Then there was this, from the THN preview:

Breakthrough Player: The Islanders are firmly convinced defenseman Scott Lachance can develop into the prototypical two-way defenseman they projected him to be when they picked him fourth overall in 1991. But his numbers and ice time decreased in his sophomore season and he was scratched for one playoff game.

Going into that lockout season, Lachance would play 225 more games as an Islander, amassing 53 more points before they gave up on him in 1999 (to Montreal, for the 3rd-round pick that became Mattias Weinhandl). Later heading to Vancouver and Columbus, Lachance actually amassed 819 total NHL games, which is no small feat. In that lockout year, he totaled 6-7-13 in 26 games. But the fact they were counting on him to be what they dreamed of at 4th overall -- constructing their blueline accordingly -- was just one more sign of how things were turning for the worse back in the mid-'90s.

Speaking of draft-depressing Scotts, 1990 sixth-overall pick Scott Scissons was still on the depth chart heading into the lockout year -- but would never play another game for the Islanders, leaving his career total at two. Two. Needless to say, the "30 goals, 70 points" scout projection on the back of his 1991 Score trading card was a bit off.

Other hints of the coming apocalypse:

Todd Bertuzzi, a center [forgot about that part] selected 23rd overall in 1993 ... reported to his first training camp a "soft" 235 pounds, but this summer tipped the scales at 223 pounds and had just seven percent body fat. Bertuzzi is being projected as an effective NHL power forward.

Yeah, just don't tell him that -- and by god don't have Clark Gillies around to offer pointers about being a power forward, because apparently Bertuzzi was too much of his own man to be bothered by mentoring or expectations. We cite the Bertuzzi trade in the litany of Milbury Mistakes -- and it was certainly bad -- but in reality I don't think Bertuzzi was ever going to reach his peak with the Islanders. Too much baggage, and he needed the tough love and overwhelming ice time Mike Keenan gave him in Vancouver before he finally got it.

Meanwhile, in the pre-Milbury GM suite:

Maloney made his greatest move in two years as Islander GM on draft day when he traded up to select Brett Lindros ninth overall, one ahead of the Toronto Maple Leafs who coveted him.

Emphasis, obviously, is mine. But heh, the Leafs ended up picking Eric Fichaud in the first round that year. Funny how things turn out.

There was one bright spot heading into that year, that remained such:

Zigmund Palffy, LW, 22: Has struggled in call-ups, but was tremendous in International League and Olympics for Slovakia. Excellent playmaker.

Indeed. Palffy put up 10-7-17 in 33 games of that lockout-shortened season. The next season began his run of three straight 40-goal seasons (43-44-87), one of few Islanders bright spots through the late '90s. Which of course meant he had to be dealt (summer 1999) -- in a move that fell on ownership penny-pinching rather than Milbury's curious quest to resurrect the squad.

Though the post-Dynasty years had hints of decline, I look back at this period as when things really started to fall apart. It was the perfect storm: Bad/absent owners, misguided management acting on ever-changing ownership directives, and bad picks that stuck around, mixed with good picks who were shown the door too soon.

Today, the Islanders have theoretically stable ownership (again, all depends on the Lighthouse project), a coach/GM with a plan and the support of management, and a commitment to build the right way, without shortcuts.

Comments: Any memories or decisions from this era that burn you to this day? Corrections or quibbles? While rehashing this era isn't how I typically spend a holiday, I have a certain sense of relief about it now that things are finally heading in a sustainable direction.