Pat LaFontaine Q&A: Chatting with one of the best

Share All sharing options for: Pat LaFontaine Q&A: Chatting with one of the best

Pat LaFontaine and former Olympic speed skater Dan Jansen are running in the New York City marathon as part of ING's "Run for Something Better" campaign to raise awareness for childhood fitness and active lifestyles. (i.e. Drop the Xbox controller and step outside once in a while, kids!).

As part of their publicity tour -- you can sponsor them at www.orangelaces.com/NYC -- I got to chat with LaFontaine about his marathon training, the Easter Epic, the 1996 World Cup, his best-ever linemate, and what he thinks of calls for a "head hit" rule in the NHL.

It was a special thrill to have this Hall of Famer on the phone to talk hockey. I remind people from time to time that I became an Islanders fan unconventionally: by way of my dad, an immigrant to St. Louis who loved ex-Blues player/coach Al Arbour almost as much as he loved ex-Blues coach Scotty Bowman. Back in those days, new Islanders draftee LaFontaine was touted locally as a "St. Louis-born" NHLer -- even though he moved to more traditional hockey environs at age 7. So my interest in him came from multiple levels.

In our conversation, right away I got a sense of LaFontaine's "class," for lack of a better word. As one of many reporters who covered him put it: "He was a superstar without pretense, an idol securely grounded, always stopping to put himself in the other person's shoes."

Yep, he truly was special, and he left our game too soon. I still can't believe it's been more than 10 years since he retired. Thankfully the trade for Turgeon worked out, but the wounds from that month in 1991 (Brent Sutter also left) still feel like they were opened yesterday. The chat begins after the jump...

To break the ice, I had to tell him a quick story about the four-overtime Easter Epic -- which he immediately called, "my first marathon."

It must've been the 10,000th Easter Epic story/question he's ever heard -- but how often do you get to tell a legend how he inadvertently affected your life?

I mentioned that in 1987, I'd battled with my mother over being sent to bed before the end of some NHL playoff games the year before. After missing a huge comeback game in 1986, I vowed to never again choose sleep over a playoff OT game (a vow I've kept, actually). So when the four-overtime, Game 7 Easter Epic happened, it was like sweet justification. The next morning (not a school day, thankfully), I explained to my mother how critical it was that I was awake (barely) when an exhausted LaFontaine broke through the wee-hour haze to score on Bob Mason and send the Isles past the Capitals in what was the longest NHL game in over 40 years.

My mother was not impressed. But now, 22 years later, I get to tell her how I just personally thanked LaFontaine for making sure I didn't miss a single one of the league's other epic OT marathon games that have happened since then. Doesn't matter if I had a test, an exam, or a job interview the next day; the rule is the same: Do not turn away from a playoff game in OT; you might be witnessing history.

Alright, on to the interview for real now. I've edited it slightly for flow...

How did you get involved with the ING Run for Something Better?

I've done a lot of triathlons for Companions in Courage [LaFontaine's foundation]. When I found out ING promotes this program in several states, I jumped on it. They've been doing it for six years, and it's a great chance to get people talking about physical fitness for kids. Kids fitness and childhood obesity is something I've always thought was a problem, a growing problem, so this helps raise awareness and raise money for the cause. They help by supporting free, school-based running fitness programs. We've already affected 50,000 kids with the program, so we just want to keep going.

So you've done lots of triathlons. Is this your first marathon?

I've done Ironmans and half-marathons, but this is my first standalone full marathon.

Whoa. Okay, so is this how you've kept in shape since you retired?

A little bit. You know, hockey players -- we don't run. [laughs] We road bike. Maybe if I was 6'5", or maybe somebody like Chara at 6'9" can do it, but these short stocky legs don't come by it naturally. And we're anaerobic athletes, and this is aerobic, so it is definitely an adjustment.

I won't be racing Dan Jansen though. His time is around 3:20. I told him I hope he can take an elbow in the corners, because that might be the only way I'd beat him.

So much of your charitable work benefits kids, like Campaigns in Courage. What led you to this fitness angle?

When I retired, I was 33. I watched a [senior] nun and a [senior] judge run an Ironman and I thought, "I need to do that." So I pledged to do an Ironman by the time I turned 40. On my 39th birthday, I did my first one. I've done six total. As I started to train and teach myself to run and swim -- I could already bike pretty well -- I got involved in smaller events and triathlons where you could raise money for a cause in the process. So it was a perfect fit.

Alright, I solicited some hockey questions from readers of my site -- mind if I hit you with some quick ones?

You represented the U.S.A. as an amateur in the '84 Olympics and as a pro in the '96 World Cup. Which was the better experience?

The Olympics were great, but the World Cup in 1996 was one of the highlights of my career. That lineup, if you remember, had Gretzky, Messier, Sakic, Yzerman, Coffey, all those guys. To beat them twice in Montreal was such an accomplishment. It was like our contribution to the next generation; just like we were all products of the Miracle on Ice, that was our way of leaving something behind for the next generation, something to inspire them.

Speaking of which, I know there are favorites, but I'm hoping for 2010 the U.S. can get in there and quietly surprise some teams, and at least win a medal if not more. That would be great.

Who was the best winger you ever played with?

Wow, I played with some great ones. Obviously Mike Bossy, but Alexander Mogilny -- I mean 76 goals is hard to beat.

--You might have had a little something to do with that...

[no laugh] A little bit, but Mogilny had such amazing talent. He and Kovalev were the most talented guys I ever played with.

As an Islanders fan who regrets that it didn't work out, I have to ask if you have any interest in returning to an NHL front office again, or has that time passed?

Your career was cut short from concussions. Do you have a stance on the talk these days about implementing rules on hits to the head?

I'm all for a physical game and keeping hitting in, but I know we can ... we can work in the right language to take the head and neck out. We're lucky we -- well, there have been serious injuries, but we're lucky there hasn't been something worse. The speed is so great and the impacts are so hard now, the head and neck need to be off limits. We don't want a tragedy.

[Editor's note: We were running out of time, so I was beginning to close it out when he interjected this to emphasize his point about instituting a head hit rule: "I will always be a proponent of that."] 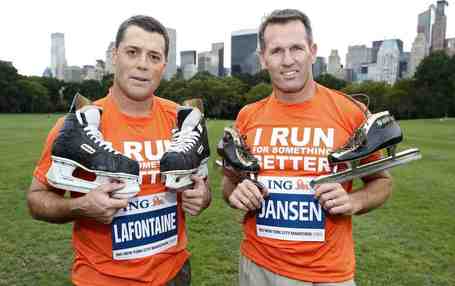 LaFontaine and Jansen holding their traditional modes of transport

LaFontaine had a lot of publicity appointments, so time was short. Thanks to everyone who submitted questions -- sorry I couldn't get to all of them. But obviously, he was every bit the engaging and thoughtful interview you'd expect. I don't typically do these publicity exchange offers, but obviously a good cause and an Islanders Hall of Famer is a different case than talking to someone to advertise a power drink or something.

Again, to donate to the cause in his name, go to www.orangelaces.com/nyc (he and Jansen will wear orange shoelaces during the marathon, and when donating you can get a pair yourself to show support).

Thanks also to Jim at SBN's Rangers blog Blueshirt Banter for the lead, proving that some Rangers fans are people, too. Jim talked with LaFontaine on their podcast show tonight, so you might check that out, too. Also, I believe David at Sabres blog Die By The Blade will be talking to him for the Sabres fan view, so watch that space for more. [Update: David's interview is up -- with audio -- and he talks more about the 1984 Olympic experience, among other topics.]