In the last two episodes of Awful Hockey Card Art, I mentioned how even the most expertly drawn crest can still look blindingly awful when it's slapped on a horribly painted "uniform."

You know what else can mess up a half-way decent logo rendition? If you over compensate for a player's faceoff lean by turning the logo a full 90 degrees. I've no idea if the people behind Warren Young's 86-87 O-Pee-Chee card just didn't understand basic physics, or if they honestly thought that the Penguins logo is a flightless fowl "running" on skates on his way to spear someone like Marty McSorley on Mike Bullard.

Either way, that is just the beginning of the disaster of this card. After one year in Detroit, Young was traded back to Pittsburgh, so the neolithic pre-Photoshop painters decided to paint him up in black and gold. The results, and the attempts at stripes that contour to the body, are epic. That little squiggly line around the waist reflects a particular level of desperation in the artists: "Well, it's all black top and bottom, but we have to make some separation between jersey and pants, so ... just kinda make this line curve somewhere. But try not to touch the Penguin's elbow on the logo."

After the jump: A storied former Islander gets abused in Philly, and a legendary Bruin receives the "just draw a line on there somewhere" treatment.

Honestly, I shouldn't be busting out this set of cards yet, because they are too easy to poke fun of and contain possibly the worst-ever alterations. Something was going on that year, and I remember after hockey cards became "investments," this remained one of the cheaper older sets. There are tons of these paint jobs in this set -- and the weird thing is, there are also tons of cards they didn't bother to paint but instead printed "NOW WITH SABRES" in small type (like this one of Clark Gillies). Personally, I prefer that treatment much, much more than gong all kindergarten-watercolor on a guy's picture. But then I wouldn't have this to laugh about 20 years later.

Cam Neely, legendary power forward, was not viewed that way by the card designers after he was acquired from Vancouver. 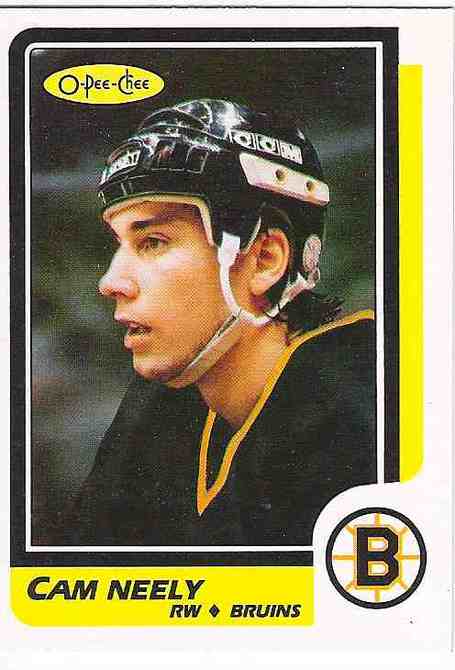 This one is lovely because he went from a black team (Canucks) to another black team, so you know they were excited to not have to repaint a helmet. "Just paint a yellow collar on there, cover up the orange-and-yellow V's on the shoulders -- they'll never notice the difference!"

Finally, poor poor Chico Resch. (Excuse me: "Glenn" on this edition. The card makers were never sure when to put "Chico" and when to put just "Glenn.") As if being banished to Rockies hockey wasn't enough, they had to do this: 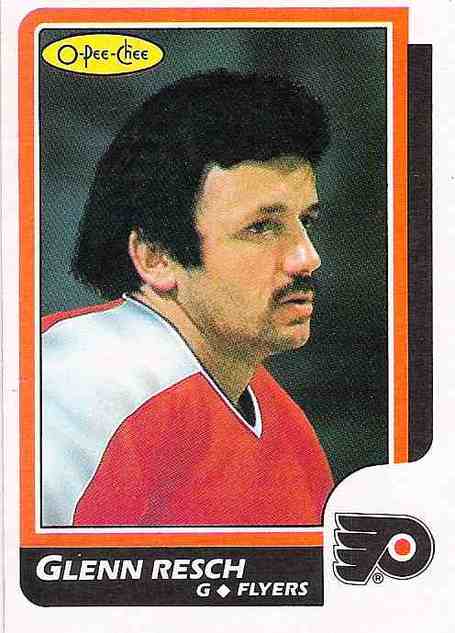 In late 1985-86, the Flyers acquired Resch from the Devils as insurance for their playoff run. (This was late in the same season that Pelle Lindbergh died.) A few things are wonderful about this card:

There are so, so, so many more where this came from. I'll try to sprinkle them during down times and when I'm out on a lake (like I am this weekend).