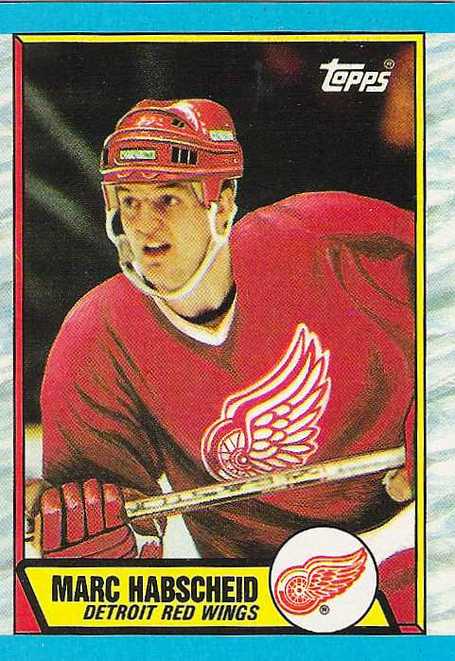 In introducing this Awful Hockey Card Art series, we featured the distinguished 1989-90 Topps card of one Randy Cunneyworth, whose Winnipeg Jets "uniform" was carefully painted on after his off-season trade by the Penguins. I mentioned how difficult to draw that arched, funky-fonted "WINNIPEG" was in their logo.

You know what else was maddeningly difficult to get right for a child hack artist such as myself? The Red Wings logo. So, naturally the Hockey Card Painters went for it that year, with Marc Habscheid, who was acquired from the Minnesota North Stars in the offseason.

(Yes, Minnesota's NHL team used to be the NORTH Stars ... and hockey cards used to come with dry, tasteless chewing gum. Also: Not everyone knew Tom Cruise was batsh--THIS COMMENT HAS BEEN DELETED BY THE CHURCH OF SCIEN--NO, THIS COMMENT NEVER EXISTED. CARRY ON.)

Again, why all the photo-altering effort for a journeyman? Is it because you can get away with your most experimental work on the anonymous guys, and not Wayne Gretzky? (After Gretzky's summer trade in 1988, rather than painting L.A. black on him -- which would've been hilariously disastrous, since they hadn't even seen that new jersey on ice -- they used a photo of him holding up the jersey at his L.A. press conference. Awesome sauce. And nice shirt.)

Anyway, as mentioned, the Red Wing wheel and feathers are a nightmare to draw. I almost thought they did some sort of transplant from another pic on to Habscheid, but if you look closely, you can see the left spokes on the wheel get into that phase where the artist goes, "And then there's some stuff over here." They don't totally meet on the left side of the wheel; they just cross in a way that hints at the artist's pending migraine.

Kudos for the placement, though. No kudos for the cheesy stick coloring and the over-the-top wrinkle shadows under each armpit and on Habscheid's belly. Someone turned the Wings jersey into a velvet drapery.

But back to that Cunneyworth card: Also involved in that trade was Andrew McBain. Since repainting Cunneyworth worked so brilliantly, you don't suppose they gave similar treatment to McBain, do you? Hmmm... 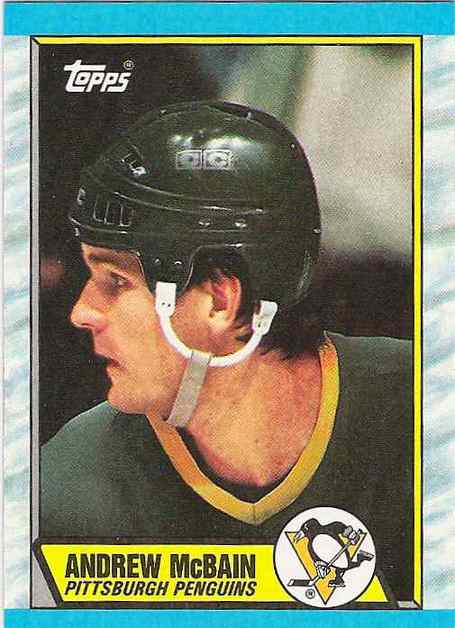 Now this is more typical of the era: the "nothing more to see here, flip along to the Brett Hull rookie card you're looking for" helmet close-up. (Speaking of the younger Hull: They wouldn't screw with the rookie card of a future Hall of Famer, would they? Heh, we'll get to that one day.)

What they typically do on these faux close-ups is paint over the helmet in a new color, paint over the shoulders, add a new collar color, and don't even bother pretending the jersey crest was in the original photo (which makes Cunneyworth's and Habscheid's rather rare).

Why do this? Because, you know, head-and-shoulder shots with no logo are what every hockey card collecting kid is looking for. "Hey look! Andrew McBain's neck whiskers! And I got doubles!"

This McBain card is an awesome example of that close-up effect: The Pens road jersey then was simple and black, yet they managed to make it look charcoal grey. The shade of Penguins yellow/gold actually isn't bad...

But then there's the helmet: They took painstaking efforts to not screw up that iconic CCM logo ... at least for the first two letters. It looks like after they got past the two "C"s, the artist just said, "Ahhh...screw it. Who the hell is Andrew McBain, anyway?"

Later in this series: We'll actually get away from this 1989-90 "Ice Year" series, and travel the truly bizarre years of awful hockey card paint jobs. 'Cause you ain't seen nothing yet.