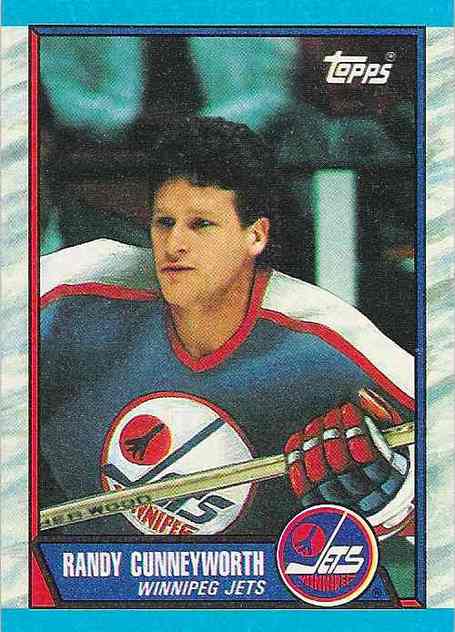 Before there was Photoshop, there was ... something else. I don't know what it was, exactly. But it was something awful.

It got better as time went on, but depending on what era you collected hockey cards (if you are indeed from an era when a pack of cards was cheaper than a gallon of gas), then you were witness -- perhaps unwittingly -- to some god-awful cover-up jobs to depict a traded player on his new team before he actually appeared in that uniform.

This is a series I've always wanted to do. Like everything here, it will be randomly occurring without warning.

With the Jets-otes in the news, we'll start with a Jet, from a "late" era card -- a period when they could get fairly detailed with their paint-overs without creating a disaster. This is Randy Cunneyworth's Topps 1989-90 card. He was acquired by Winnipeg from Pittsburgh with Rick Tabaracci and future Islander Dave McLlwain for Jim Kyte, Andrew McBain and Randy Gilhen on June 17, 1989.

Ironically, Cunneyworth only spent 28 games in a Jets uniform before moving on to Hartford. So this was his only shot at hockey card infamy in Jets red-white-and-blue. Note that they not only went to the trouble of drawing the Jets shoulder and collar striping, they meticulously painted the Jets logo and colored gloves on him. Almost as good? They even repainted his stick, carefully printing the "H E R  W O O D" of Sher-wood on his oddly uniformly colored wood stick.

[This job is so good, you might have to click on the enlarged image to appreciate its detail. In the world of official hockey card touch-ups, they don't get much better than this -- I mean, did you ever try to draw the arched "WINNIPEG" in the Jets logo? That part alone nearly killed me as a kid.]

That's some serious effort for an NHL journeyman. You know some Topps/OPC artist put sweat and love into this work. Fortunately, it gets much, much worse, as we'll explore when we delve further into this series...