Today's Lighthouse project rally and public hearings are about a lot of things -- public vision and policy, development, politics, economic stewardship, real estate bets, and more. But for the Islanders fan it is also about replacing an aging building with something that can help keep the storied club viable on Long Island.

So what is this place, this Nassau Veterans Memorial Coliseum, this home to four Stanley Cup champions and one NHL All-Star Game (1983, right before the Dynasty's final Cup)?

It is the second oldest-building in the league. But by the time it is replaced or renovated, it will be the lone oldest. Only Pittsburgh's "Igloo" [now fruit bank of some sort] Arena is older, built in 1961, but it's a year away from being replaced. Edmonton's formerly Northlands Coliseum (now [chain of some sort] Place) is younger, opened in 1974. (I always liked the symmetry of the two dynasties of the '80s wearing orange and blue and playing in the league's only two "coliseums," and it helped me stomach the Oilers' ascendancy just slightly.)

But the Coliseum -- the Islanders' coliseum, the veterans' coliseum -- has its own special historical narrative from before and after its 1972 opening. It's corporate-free name was an honor issued in part because it was built on 63 acres of the 1,200-acre former Mitchel Field Army/Air Force Base, which was decommissioned in 1960 and largely acquired by Nassau County in 1961.

Lots more facts at the Coliseum's official site, and today is a big day for the site's future. But the history buff and nostalgic side of me thinks of something else at times like this, because while a replacement is necessary, there is one thing Islanders fans should realize: The new structure will not be the same. Nassau Coliseum is one of the last "old barns" -- not of the generation of the Montreal Forum and Maple Leaf Gardens, but still of a generation of buildings where function superceded futurist convenience.

You won't realize just what is missing from the "old barn" until you hear the difference in sound and atmosphere in the renovated building. Softer, more expensive, more spacious seats and aisles and conveniences mean the new structure will be less English soccer stadium and more modern luxury box heaven. No matter how much you scream and yell, it will sound different -- and it will take some getting used to. 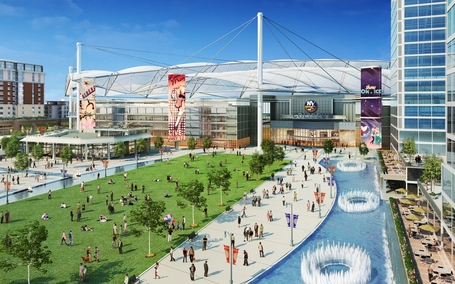 Again, the modern features are necessary to compete in modern sports. But if everything goes forward with the Lighthouse project, you'll want to spend the "old" Coliseum's final years (before it adopts some other corporate name) appreciating the atmosphere and the echoing ghosts of a building constructed in another era: An era before we cared about tweeting from games; before we cared about calling a friend in the middle of a fight; before we demanded gourmet pizza at a game; before we did game threads and checked blogs after games; before there was piped in rock music and scoreboard games and everything else that seems intended to placate our short attention spans in a way that implies the game on the ice somehow isn't enough.