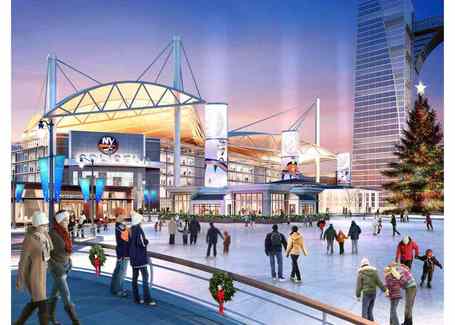 Over the last 18 months, the principals have met with war veterans, sports fans, school boards, civic leaders and elected officials. They created at least four videos and a commercial, and developed several slogans, including "Build It Now."

And this time, the Lighthouse has garnered very public support from major figures...

It's just about here: If Anchorman were running proceedings, he'd say tomorrow is "kind of a big deal."

Public hearings on the Lighthouse project proposal begin at 9:30 a.m. at the Adams Playhouse at Hofstra -- but before that, a rally for supporters at 8 a.m. outside Nassau Coliseum, emceed by Howie "radio simulcast" Rose and featuring Charles Wang and Der Kommissar, Gary Bettman. (Will fans treat it like the Stanley Cup finals and boo Bettman at a completely irrelevant moment just to get in dig number 3.5 million and one? Or will they think about the bigger picture, and not let their distaste for one man (or his puppetmasters) override the point of why they're there?)

The public comment period does not end with tomorrow's hearings. You can enter your written comment into the record with the Town of Hempstead through this address: lighthousecomment@tohmail.org