Grading the Islanders: Radek Martinek, my kind of Czech

Share All sharing options for: Grading the Islanders: Radek Martinek, my kind of Czech 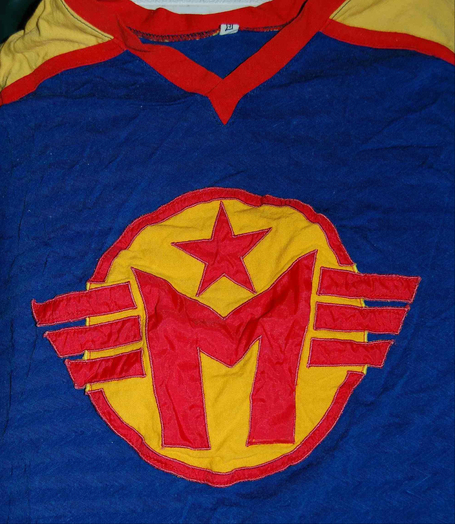 (Left: If only he'd been born a few years earlier and started his career under then-Czechoslovakia's previous regime, Radek Martinek would have been lucky enough to wear this beauty for the pro hockey team in České Budějovice. Doesn't that logo just brim with optimism and Five Year Plan loveliness?)

As we move through the alphabet of Islanders regulars to issue report cards on their 2008-09 seasons, we come to one Radek Martinek, a soft-spoken, gentlemanly Czech for whom I have a confessed soft spot that goes beyond shared ethnic roots. A steady two-way defenseman, Martinek has nonetheless tested even the most patient Islanders fan thanks to the Hockey Gods' adversarial relationship with his health.

Do read the review and give Martinek your grade, won't you? (If you're on the main page, click "Continue reading this story" that appears after the poll to get to the main data ... and poem.)

Random Fact: His 6 goals last season were a career-high, at a career-high rate in 51 games (.12 goals per game) -- a small-sample fluke, or a reflection of Scott Gordon's more aggressive system?

Random Fact 2: Despite missing 31 games, he was actually sixth on the team in total minutes logged for the season -- a testament both to the Islanders' injury woes and to the fact that, when healthy, he is a workhorse.

"This is our concern, Dude" Fact: Martinek has reached 60 games played just three times in his seven NHL seasons. BUT, reason for hope: He seems to be on an every-other-year injury cycle, so maybe this year we get 70 games.

Blogger Full Disclosure Fact: Before coming overseas to join the Islanders, Martinek played for my father's hometown club, HC České Budějovice. (Before the fall of Communism, they were called Motor České Budějovice: You know ... because the Soviets & Friends Valued Comrades were big on symbols of economic production to represent their sports names. Anyway, that's the jersey at the top of this post. Say one thing for Soviet-era sports: The unis weren't cluttered with capitalism's ubiquitous ads. However, to paraphrase Monty Python, the aesthetics of uniforms worn by strange men playing on frozen ponds distributing hockey sticks is no basis for a system of government.)

The Story: Radek Martinek just does his job, and he does it quite well. If only his health, or the hockey gods, or his genes, or whatever conspires to injure him, would let him do his job more often. You become so accustomed to freak injuries felling Martinek, you end up forgetting how good he is until he comes back (healthy) and picks up right where he left off.

Last season, it began with the home opener -- in the cruelest way for a hockey bigamist like myself -- when David Backes (of my other pursuit, the Blues) placed a questionable hard hit on Martinek behind the net, injuring his shoulder.(Incidentally, I didn't catch that game live because I was seeing literally dealing with my father's remains. The hockey gods were unkind to my favorite Czechs that week.)

It took Martinek quite a while to come back, and after he returned the first time, he either wasn't quite ready or re-injured it (or both). By the end of the year, though, he was back to being Perfect World Martinek, which is the steady, productive Martinek that exists in a EA Sports-like world where you've set injuries to "off."

The Good: As mentioned above, he's quite the capable defenseman, excellent on a second pair and steady even on a top pair. All for $1.5 million.

The Bad: Also as mentioned above, his career is beset by an assorted candy box of injuries. The $1.5 million is less of a bargain when you lose a high-depth-chart guy for a third of the season.

The Poem (or lyric, if you will, to the tune of "You Might Think" by The Cars)

You might think it curious
All the times I'm felled
But I take. This game. Kind of serious
(All I waaaant)
All I want is health

And you might think I'm fragile
Why keep my bones around?
But at $1.5 per season
I'm the best buy you've found

The Grade: Well, sometimes I try to nudge you toward ignoring fluke injuries, and sometimes they're an inexorable part of the equation. I'll let you decide whether to give him a pass on the health front. However you spin it, give him a grade for the 2008-09 season relative to your preseason expectations. A "3" = average = met expectations = C grade. A "5" = superlative = far above expectations ... etc.

As always, you can use the comments to discuss your grade, discuss his season, or -- best of all -- discuss what should be done with Martinek and what you expect from him this year.