Pre-Bettman, when the NHL had already 'stolen the game' from Canada

Share All sharing options for: Pre-Bettman, when the NHL had already 'stolen the game' from Canada 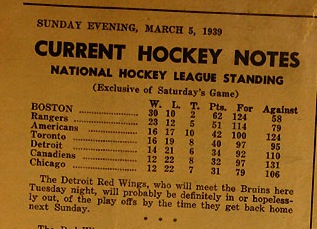 Evidence of the WWII-era U.S. plot to steal the game from Canada [Puck Daddy photo]

The latest Puck Daddy post features a glorious collection of hockey artifacts that Greg Wyshynski found while traveling around Maine. One such artifact was the newsprint sampled above, which had me belly laughing when I noticed -- in visual form -- the geographical make-up of this league in 1939 (5 U.S. teams, 2 Canadian).

As a hockey obsessive, I know the history of the NHL fairly well. I know the many incarnations and failed franchises that reflect the league's fine tradition of shady-but-connected owners going all the way back to World War I. I also know that for the longest stretch in its history the league had just two Canadian teams. But I suppose seeing it struck me this time, thanks to the tone of this summer's Balsillie-fed, faux-patriotic outrage.

One oft-repeated meme about NHL expansion -- that Gary Bettman has propped up southern franchises "to avoid admitting he was wrong" or some other personal motive -- pretends that expanding a continental league to places where population and capital were actually booming was just some idea he dreamed up one day, rather than something the NHL had sought long before bringing him on board as heir to the dubious legacies of John Ziegler and Gil Stein.

Maybe I'm just parsing critiques -- it's all part of the devil's bargain we forge with the league, isn't it? (More precisely, I'm bothered that Balsillie's cheesy makeitseven act takes a legit complaint and undermines it with misdirection to stir up nationalist fervor and further his own cause. I'm glad he's inadvertently stirred up a lot of league dirty laundry that needs airing; I'm disappointed he's brought along a load of misconceptions worthy of a political convention. The NHL's biggest expansion problem is not spreading to non-traditional markets or ignoring "underserved" southern Ontario, but rather desperately choosing questionable partners to get there as quickly as possible.)

I've no love lost for Bettman nor his performance as commissioner, and I know "Bettman!" is easy short-hand for "all those forces who make this game less than what it could be." But he is chosen and retained in his role at the bidding of owners who seek to profit from the game by whatever means. (That's the part of the devil's bargain we have to either grudgingly accept or bail out on.) If that means placing teams where the population is growing and capital is accumulating in exchange for an expansion fee now and a (hoped for) annuity pay off two decades down the line, well that's an idea that's as old as the league itself.