Share All sharing options for: LHinks: Reactions to Wang's 'regret'

As many have pointed out, Charles Wang's quote in Newsday about regretting purchasing the Islanders was not a new one -- and hardly unexpected, given all the obstacles he's faced before being selected as developer (check) and being allowed to redevelop (not yet) the Nassau Coliseum site. 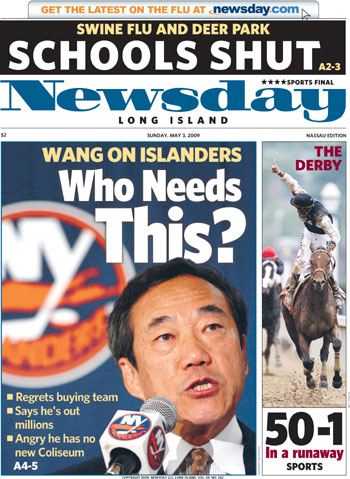 (To say nothing of Wang's own missteps that have made owning the Islanders a, uh, less than ideal experience. Oh, how much he has learned -- we hope -- about running a hockey team since those early days.)

The eternal problem, of course, is that when you play the PR/drum-up coverage game by giving Newsday some direct quotes on how you feel, you no longer still do not control the message.

So while you may want to simply share your frustration with Kate Murray and highlight what appear to be absurd political obstacles to the Lighthouse project, and while you may want to point out -- again -- how much money you've dumped into saving "the Island's only pro franchise," you're also pretty much ensuring that Newsday will run with it as they see fit -- with coverage like we saw over the weekend. Which further means that opponents and doubters will selectively splice that coverage to question whether it's worth it to enable anything for the Islanders. ("See, their own owner says the team's not worth owning," etc.)

It's a double-edged sword: On one hand you're pleading that no one else would or did save the Islanders, so please let the Lighthouse project go through so you can commence the salvation. On the other hand, you're inadvertently reinforcing the misconception that the franchise is not strong enough to justify moving land and sea for this development (Even if, again, to stress: Renovating this dilapidated arena for the hockey team's 45 dates is but a loss leader for a much more significant development project. If the NHL folded tomorrow, the benefits of the Lighthouse project -- and a national-tour worthy arena -- would largely remain).

It's an interesting game, and a tragic one in many ways. Wang has tried not to play hardball and has never asked for the kind of corporate welfare that builds most U.S. sports venues. But now that Wang's lost patience and has felt compelled to bring out the ugly stick, it increasingly looks like he's being dragged into a political campaign -- and thus Newsday's coverage is following a "he says ... but opponents say" path, with all the false equivalency that entails.

What an interesting summer we will have, both on ice and off. Some links and reactions around the Islanders blogosphere to the latest...