Share All sharing options for: Islanders of Yesteryear: Ed Westfall, '18'

Note: Part of a periodic, unending series, these retrospective on Islanders of the past are open to your input. Share your memories in comments, or even post your own full pieces in a FanPost on the right margin. 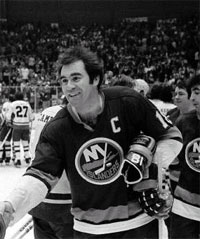 Ed Westfall was inducted this week into the Nassau County Sports Hall of Fame, so now is as good a time as ever to add this original Islanders captain to the nascent collection of old Islanders profiles and links on this site.

I tread carefully with a Westfall tribute, because he is a franchise legend whose playing career was wholly before my time.

I knew Westfall as an announcer and as one of the characters in a Stan Fischler book that boldly predicted the Islanders were building the NHL's next dynasty. (Turns out that book was quite prescient -- certainly better than The Maven's predictions these days. Alas my dad didn't pass me the text to me until the dynasty was on its last legs.)

For the younger fan, the temptation is to glance at Westfall's career with regret: Aw, man, the Islanders' first captain put all that time in with an expansion club only to miss the dynasty?

But older fans will point out that Westfall was not only a key, unsung part of the Bruins' two Cup wins in the '70s, he was also part of the Islanders' "Core of Four" in spirit, as Islanders announcer. As he told Newsday recently:

"I told them before the '79 season that I was going to retire. It was time. The team was ready. Your role changes. I became their broadcaster. I've got no regrets. None. That's the evolution of sports."

... "I tell everyone I've got six Stanley Cup rings," he said with a rink-wide grin. "Two I earned as a player and four I got when the Islanders let me feel like I was still part of the team. It was quite a hoot to see all that unfold." 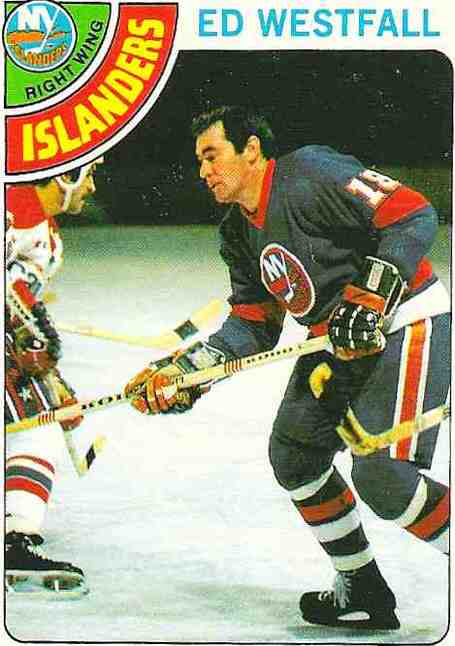 It didn't always look like it would turn out that way.

Westfall had a pretty nice life as a forward with a defensive conscience for the Bruins, who originally signed him as a defenseman.

He debuted in 1961 but didn't retain full-time status until 1964-65. His goal output in his full seasons remained in the teens except for his second-to-last year, 1970-71, when he potted a career-high 25 goals and 59 points on that ridiculously prolific Bruins team.

(Click this YouTube link to watch Westfall score one of the Bruins' NHL-record three goals in 20 seconds against Vancouver that season.)

A year later, as the NHL has seen in countless expansion builds before and since, the Islanders sought him for his two-way ability and his experience in a winning environment. When a first-year club can't buy stars, they target the reliable workmen who know how the stars get their Cups.

(While some would argue Westfall's #18 should be added to the Islanders' already crowded collection of franchise builders in the rafters, it was somehow fitting for a classy, handsy two-way forward like Mike Sillinger to sport his number the last few seasons.)

Westfall famously had an inkling his life had changed when he returned from a trip abroad only to have a Boston customs agent express condolences. Condolences for what? For being exposed in the expansion draft by the Stanley Cup champion Bruins, to be claimed by the no-name Islanders.

But rather than pout, '18' soon took to his role as franchise hub and bought into what Bill Torrey and, a year later, Al Arbour were building. The captain held parties and lent a hand to rookies as the "glue" that held a struggling young team together:

"There was a pattern to it all,'' he said, referring to the step-by-step additions of draftees Billy Harris, Denis Potvin and Clark Gillies; coach Al Arbour and role players such as Andre St. Laurent, Bob Bourne, Dave Lewis.

Remarkably, the Islanders faced the "choke" label after falling short in multiple playoff runs in the late '70s. But in truth, their fast rise was unexpected and almost too fast. Said Westfall of their trip to the Cup semifinals in their third year (the year they historically overcame a 3-0 series deficit against Pittsburgh):

"That shocked the heck out of [then-owner] Roy Boe and Al Arbour and Bill Torrey. Nobody expected the team to get to that point that quickly,'' Westfall said. ``We all just dug in and worked at it.''

Westfall matched his career-high 25 goals in 1975-76, but after that his role was understandably being replaced by the core of younger stars and plumbers who finally took the club to the promised land, in just its eighth season.

Well regarded by teammates and opponents, Westfall represented the Islanders in the All-Star Game in 1973, 1974 and 1975, and won the 1977 Bill Masterton Trophy. He eased right into the broadcast booth in 1979-80, where he saw the dynasty in its entirety and would watch over the club he helped build for 23 seasons. (Watch Westfall and Jiggsy call the Gillies-Hospidar fight.)

As the recent Newsday profile pointed out, Westfall was there to see the rise of this franchise the first time:

"You could feel it and see it building for a couple of years. From 1975 through 1985, it was the best franchise in the league. It was so exciting to be part of it. You couldn't get into the building."

Like a lot of us, he looks at other NHL teams that recently rebounding from rock bottom -- St. Louis and Chicago, not to mention Washington and Pittsburgh -- and thinks the Islanders can do it again. 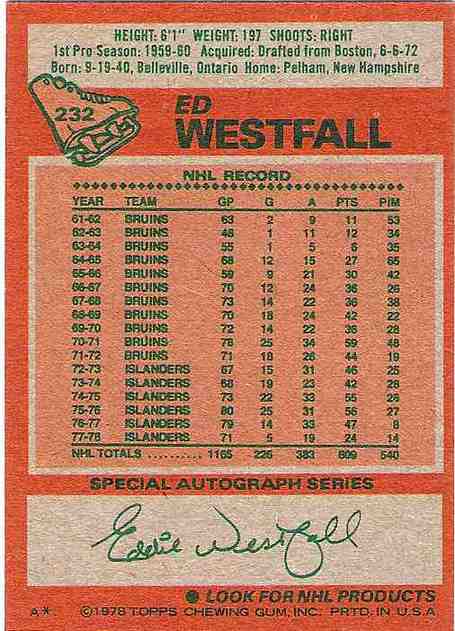 Ed Westfall around the Web

At left: the back of his Topps card during his final season.

>>Westfall drops the puck during the Islanders' retro night (the first re-appearance of the original threads) back in 2007. (Islanders Army)