Burke, Snow and the Summer of Tavares

Share All sharing options for: Burke, Snow and the Summer of Tavares

For as long as Brian Burke has been associated with the NHL, he has been what those in polite circles might call a "lady of the night" for attention.

From his time with the Whalers to his time as league discipline czar and his time in Vancouver, Anaheim and now Toronto, Burke has seemingly never turned down a chance to have his opinion heard. In a sense, he is another anti-Garth Snow when it comes to speaking his mind to fans.

(Think to yourself: How often do you hear Colin Campbell speak in his current role with the league -- other than to spew nonsense about the league's disciplinary non-policy? And how often is it remotely interesting? When Burke had that job, he was on the air constantly.)

Particularly in contrast to Snow's often irritating "keep it in house," closed-mouth nature, which defies the promotional needs of his under-covered team, Burke's flair for ink is not a bad thing. His is not exactly WWE-style manufactured drama for drama's sake. Whether the topic is league rules, how to increase viewership, or how to improve his own Whalers Canucks Ducks Leafs, the focus of Burke's bluster is generally on promoting the game and his team, where he is but a platform for that promotion. (As opposed to, say, Sean Avery, whose focus is promoting himself, where the game is just a convenient platform for that end.)

That's not to say Burke doesn't crave the spotlight; just that he's smart enough to make the topic hockey when he shows up at the media corner to get his fix.

So while he may lack tact at times, he knows exactly what he's doing when feeding the media. Like A-Rod announcing his contract maneuvers in the middle of the North America World Series, Burke's pronouncements about targeting Tavares both on the day of the lottery and the day after were predictable reaches for the spotlight. (Oh, that's right -- he didn't make a pronouncement yesterday, it was "sources" who just happen to know exactly who Burke called yesterday and have an incentive to spread it -- i.e., not Snow nor Tampa Bay. Got it. Must have been the Twitter "Brian Burke.")

At least in Burke's case, though, his team was actually involved in the news of the day, the lottery. There's tangential relevance to him joining the story. Sure, he's not going to be able to pull off a deal for Tavares unless he absolutely bankrupts Toronto's stock for the next few years, but he knows how to get his team's fans (and media) excited on the eve of a playoff season that doesn't include them.

I've mentioned in a few places how I don't think Burke has the assets nor reason to do what it takes to land Tavares -- the Leafs are still in JFJ-imposed purgatory and will need the patience to climb out of it -- but I agree with Steve's take at HockeyAnalysis. It ain't happening, nor should it, considering the likely price and the status of the Leafs rebuild.

That doesn't mean we'll be spared a summer of fun, though, as Burke tries to make waves and create imagined pressure on Long Island and Tampa Bay to deal their pick. For Burke, it's a win-win: The Toronto media laps it up, and Leafs fans -- who seem increasingly disenchanted with some of the "mittenstringers," er, media who serve them -- build up the Cult of Burke with hope, and re-enforce the "If anyone can do it, Burke can" mythology.

In the end, it's going to be a circus that probably amounts to nil. For those inclined to panic as if the Burkiemonster is going to come and steal our pick, just try to sit back and chuckle. Enjoy it in the spirit of this hilarious ransom note from LeafsFaninVan at Pension Plan Puppets (thanks to blurr1974 for sharing): 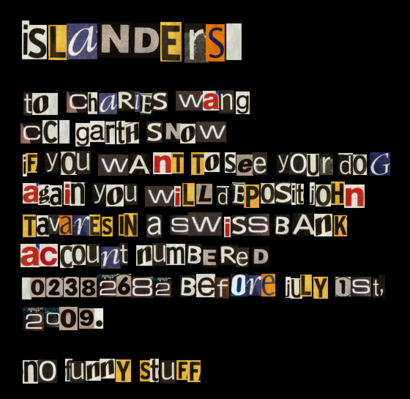