Share All sharing options for: Islanders Gameday: 1st vs. 30th in Motown

The Thrilla' in Manila. The Rumble in the Jungle. The Ice Bowl: Child's play, all of them, when compared to how tonight's matchup will be remembered. You'll tell your grandchildren where you were when you watched the 30th-place Islanders clash with the 1st-place Red Wings on a mild late March evening back in '09: "Sonny, pull up a chair and let me tell you about Thomas Pock."

Seriously, is anything at stake tonight? The lottery positioning is all but secured -- despite Colorado's best effort (six points ahead) to join us in the basement. And while Detroit is chasing home ice advantage in the playoffs, it's hard to imagine their goaltending carrying them all the way to a round where first in the conference or league will matter.

It sounds idiotic to say that about a first-overall club, but we know how psychologically important goaltending is in the playoffs. Two bad games turns a series on its head. So tonight's game may be important only as a cheap way for the oft-flaky ex-Isle Chris Osgood to get his fleeting confidence back.

I've seen Osgood as a foe with the Wings, I've seen him as an Islander, I've seen him as a Blue. In many ways his career has been remarkable. Still, that the Wings managed two Cups with him is as random as catching a crazy yet hard-to-shake girlfriend on a good day: Just run with it, and don't ask questions. Withstand the volatility, mood swings and frightening phone calls, and maybe just maybe you'll reap the rewards again.

Newsday says Doug Weight could return tonight in his home state. Whether it's tonight or next game, I'll be happy to see him in the lineup for a few games before his contract expires and throws his Islanders future into uncertainty.

In the Islanders' remaining schedule, they have several tough opponents and a couple of desperate playoff bubble ones, with one lottery combatant (Tampa Bay) in between. After their happy, promising spur of late, I could see them waking up to the reality of the NHL schedule, creating some questions for our young prospects as they head into the summer. When the pressure is off, they've showed us what they can do. But can they do it consistently?

If they kept up their strong play all the way through the end of the season, they may have deluded us into a false sense of confidence about the quality of pieces going into next year. A little struggle is a good reality check; there is still so much left to do this summer to take a step forward into the parity playoff bubble pack.

A Brief Reflection on the Fortunes of Fandom 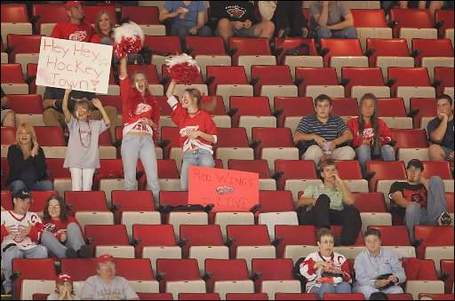 Any longtime sports fan has been there. Any fan knows "there" can come again.

As some readers and stalkers know, I was born into a bigamist following of both the Blues and Islanders (Yes, I know. Rough times lately. But it wasn't always this bad). So the Blues side of me in one sense loathes the Wings for their post-Hull n' Oates Central Division supremacy and the inevitable addition of the johnny-come-lately fans who infect the fanbase of a winning squad in any sport. As with any top-payroll champion, taking pride in your team's ability to buy the best players has always seemed hollow to me -- which is why Bill Laurie's moment of splurging on the Blues felt unholy from Day 1. It was like: "Great! We have one of those antsy owners who throws money around! ... so why do I have a fizzy feeling in my stomach?"

But really, my formative hockey years were the '80s, when the Red Wings were a poorly attended Norris Division doormat and the presence of six teams made the Patrick Division the most interesting in hockey. I still instinctively chuckle when I see "HOCKEYTOWN" emblazoned across everything Red Wing, because I take the long view where fortunes are fickle and all sports owners are temporary. I remember what an afterthought the Wings were until the Blues' cheap owner wouldn't pay Jacques Demers, and the Wings new owner hired him away to slowly turn their franchise around.

So really, I hated the Blackhawks and the Rangers most: two respective rivals who truly boiled the blood and ignited anxiety. But here's what '90s mismanagement of both of those squads taught me: I find hockey more fun when you have real cause to "hate" your rivals rather than pity their misfortune. While the Rangers' slump may have taught some of their newer Cup-era (single Cup, btw) fans some much-needed humility, I don't know what Hawks fans ever did to deserve the last decade.

Nobody ever deserves it. It's outside forces that pull a sports fan's fortunes by the ear. Always. Whatever our favorite team, we're all at the mercy of its owners' competence: The same owners who made the Blues a model expansion franchise almost ran the club out of town. The same owner who saved the Islanders held unending faith in Mike Milbury and signed Yashin to a 10-year deal. If you stick around for the ups and downs, you're hanging around for the thrills -- and you're appreciating those thrills because of the continuous narrative represented by that logo (which is why I find complete logo changes so offensive).

With the Michigan economy being what it is, with the cap being what it is, with Nik Lidstrom being the age he is, it's not hard to imagine the Red Wings retreating back to the Pack of Parity some season soon. Who will stick around to live and die with their fortunes when they do? Those will be the fans I can identify with.