Share All sharing options for: Islanders of Yesteryear: Ken Baumgartner

Editors' Note: I started these as FanPosts, but I think to include video and archive them in a proper section, I will need to duplicate them as main-thread stories. Please pardon the inconvenience (and replication) during construction... And, as always, feel free to create your own as FanPosts, and I will happily feature them on the front page. 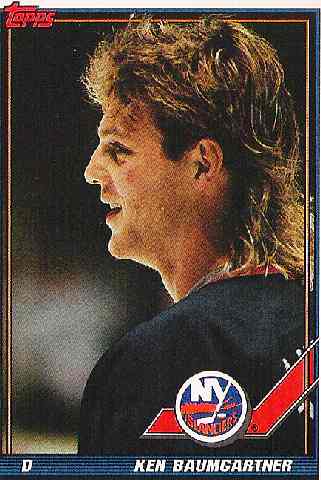 Undersized (usually listed around 6'1", 205) but an incredible fighter. One around whom much fan mythology has been composed. The guy who circled before that faceoff to get a running start at the Rangers -- rather than line up -- to administer NHL frontier justice at the end of that infamous LaFontaine Game.

[For those unfamiliar, this was the 1990 playoff game where the Rangers took out LaFontaine, leaving him with a concussion -- I forget, how did his career end again? -- and some Rangers fans even rocked the ambulance as it took LaFontaine away. This incident -- and every big fight in Baumgartner's career -- was chronicled with video and news excerpts in ridiculously meticulous detail last summer at Two Minutes for Blogging. Seriously, if you have any interest in Bomber, you need to check that link.]

Befitting such mythology, he hailed from Flin Flon, Manitoba; carried both Canadian and Swiss citizenship; sported a strong mullet (shown in each hockey card); and scratched an NHL career together after being Buffalo's 12th-round draft pick in 1985. Not much of a hockey player, skill-wise -- although note how Score and SI credited his protection for Pat LaFontaine with the Islanders' 23-6-3 streak after he was acquired from L.A. with Hubie McDonough for "cancer" and "sulkmeister" Mikko Makela. He's widely considered by fight followers as one of the best technical fighters in NHL history. (At his size, technical ability and guts was a must.) 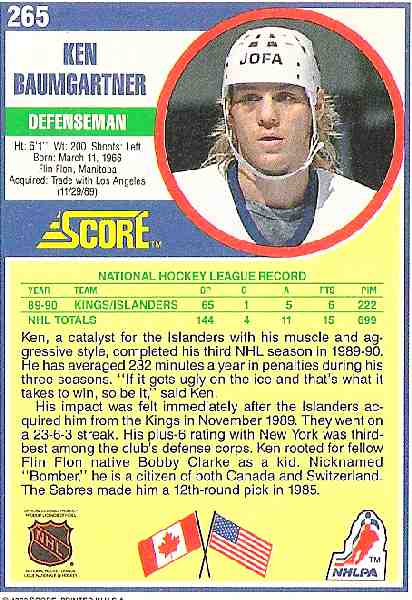 "Bomber" is today's subject because he's a former Mighty Duck (today's opponent), too, and he's an appropriately fan-revered figure to start the series. Baumgartner's Anaheim career was short, just over a season. But in his only full season with the then-Mighty Ducks in 1996-97, he managed to appear in 11 playoff games. Different times, those.

In parts of three seasons with the Islanders, he managed 678 PIMs in just 175 games. It always seems like he was with the Isles for longer, but that's how it goes with enforcers: Their personalities and mythology live on long after they've moved to the next stop on their journey.

Feel free to share your Bomber memories in comments.