With each jersey foul, a piece of me dies

Share All sharing options for: With each jersey foul, a piece of me dies

I used to see NHL jerseys as sacred: Historical markers that record the stories, figures and trades of our day. Actually, screw that -- I still see them (pre-Reebok Edge, anyway) as sacred. The weight. The feel. The horizontal stripes. The fonts and numeric styles. The reminders of which guys played where.

I suppose I thought the cost of customization was enough to deter anyone from making too big of a joke of them. Minimum $150 for a 69 jersey (huh huh) is a lot of beer money down the drain. But I clearly underestimate the disposable income of the NHL fan, and how much he's willing to spend on a joke.

So part of me looks at Puck Daddy's "Jersey Foul" series like a carwreck -- it's hard to look away, but it's a damned tragedy nonetheless. A little piece of me dies with each faux pas. I reach for the mind bleach.

Anachronisms are almost worse than total joke jerseys because they have that "almost real, but sadly no" feel to them. Like implants. Or fat-free Pringles. Natural's not in it.

So this, from Puck Daddy's latest Jersey Fouls episode, disturbs me greatly: 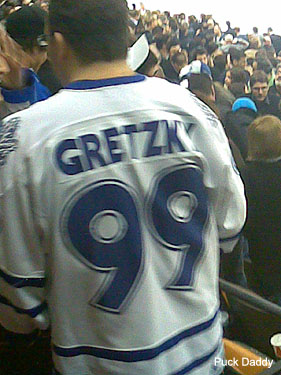 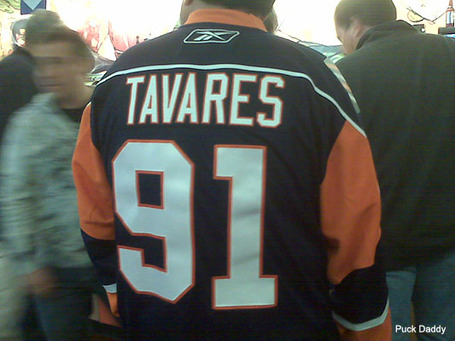 Now, Gretzky is "The Great One" and all. The league even short-sightedly forced all teams to retire his number. Yada yada. But not only was he never a Leaf -- he absolutely tormented them in 1993, in a way that still haunts Toronto fans. Unless you're an opposition fan (and again, then you have a bigger disposable income question), why would you do this? Would a Philadelphia fan put "NYSTROM 23" on a Flyers jersey? Would a D.C. fan put "LAFONTAINE 16" on a Caps jersey? (I know, I know, most cheeky Ovechkin worshipers are too young to remember Bob Mason...)

Then you have the Tavares thing. I don't know if Tavares will ever wear an Islanders jersey, but if he does, hopefully it's not in that design. Hopefully it's in the classic royal blue threads, after a version of this year's retro-third goes to its rightful full-time role.

But still, what's the rush? Why not wait? The Islanders are now a frightening four points out of 29th -- and even in 30th place their chance at the #1 is still only 48.2%. Assuming the Islanders will have Tavares is like Leafs fans assuming they would have won Game 6 (or hell, Game 7) in 1993's Campbell Conference final if Gretzky had been thrown out after his high stick -- and then gone on to beat the Cup-winning Canadiens (who downed the team that downed the Leafs, after all). It's possible, sure. But it's not even a 50/50 chance. I sure wouldn't bet $150 on it.

And these are just the historical inaccuracies. As always, for much worse matters of jersey taste, follow that Puck Daddy link. If you dare.