[Editor's Note: Updated with video and duplicated as a main-thread story in March.]

A rare L.A. Kings visit to the Coliseum is a good time to feature Robert Thomas 'Butch' Goring, the longtime King who became an Islanders fan favorite on the ice, a beloved personality in the broadcast booth -- or in the stands, his perch for in-game commentary recently -- and a thankless coach for the worst Islanders roster of the 2000s. 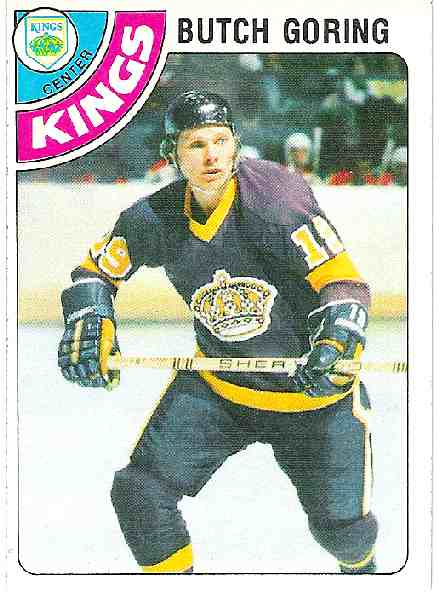 Kings fans (except for the older or history-minded ones) might not realize it, but Goring's trade from the Kings to Long Island is the stuff of legend: In Islanders mythology, Goring -- acquired with his wacky helmet at the trade deadline of their first Cup-winning season -- was "the final piece" to making the 1980-83 Cup dynasty happen.

The Islanders were widely seen as a budding powerhouse in the late '70s (Stan Fischler even penned a 1976 book: "The Triumphant Islanders: Hockey's New Dynasty"). But successive playoff ousters had critics slapping the "choke" label on a franchise that wasn't even 10 years old.

The deal was no slam dunk: Popular Billy Harris and Dave Lewis were sent the other way. But Islanders GM Bill Torrey and coach Al Arbour felt it needed to be done.

Boy were they right.

The addition of Goring -- a tireless, talented center who provided depth, secondary scoring, penalty killing and non-stop hustle -- helped get the Islanders over the top, where they reeled off an unbelievable 19 consecutive playoff series victories. Goring was one of 17 players who won all four Cups with the Islanders. 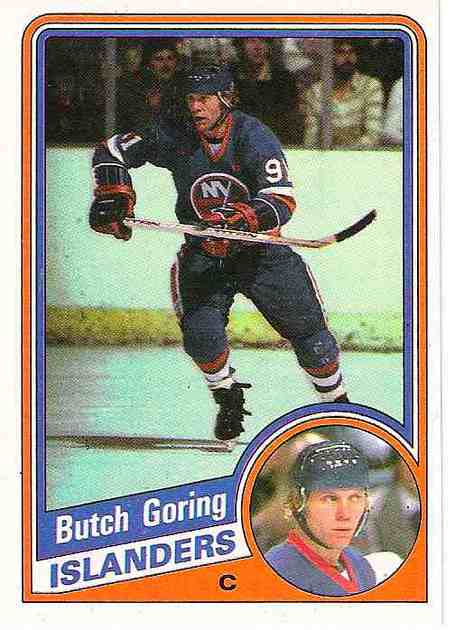 Goring wasn't only relentless and skilled enough to play on a scoring line, he was also clean: Four times he completed an NHL season with only one minor penalty. That kind of inhuman discipline, combined with his personality and work ethic, made Goring the type of player you'd expect parents to have their kids emulate.

Goring was not a big guy (even for back then: 5'9", 170). He was not an intimidating guy. He was just a guy whose motor never stopped and who wanted it more than his opponents did -- with considerable skill to go with it. (On that note, get a kick out of the back of Goring's space-constrained 1978-79 Topps trading card: "He's a great one-on-one player" -- i.e. great on breakaways. His two-way play has some saying he's even Hall of Fame-worthy.)

Known for poor sartorial tastes (back then ... he looks snazzy on broadcasts these days), a robber reportedly once took everything of his roommate's ... while leaving Goring's clothes untouched.

As mentioned, Goring is currently a beloved contributor on Islanders MSG+ broadcasts and pre-game shows right now. But he also had coaching aspirations that never panned out. He briefly coached the Boston Bruins (where he finished his NHL playing career), before coaching in juniors and spending the '90s working his way up to get the Islanders' head job in 1999-2000 -- an awful roster with which to finally get your big-league chance. 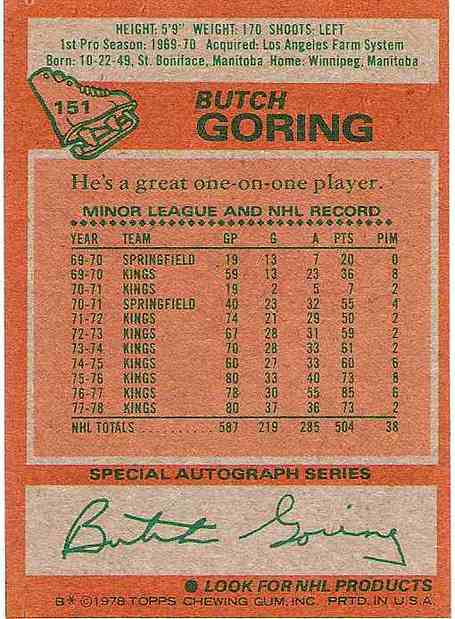 After the Islanders, he coached briefly in Anchorage, Alaska, and even in Germany -- but never for long. These days, he's on TV and occasionally running into Islanders fans in Manhattan.

Got any favorite Butch Goring memories, past or present? Share 'em in comments.