What people forget about how the Islanders got here

Share All sharing options for: What people forget about how the Islanders got here

Former Islanders PR man Chris Botta gives what -- for me personally -- is the most eagerly awaited post since he started his blog: His window into the John Spano monstrosity -- the time when a guy with no money somehow "bought" an NHL club:

While everyone had their "ah-HA!" moment when they realized Spano couldn’t be what he said he was, the genius of this psychopath was knowing people like me wouldn’t be reckless enough to risk our careers and say something about it. 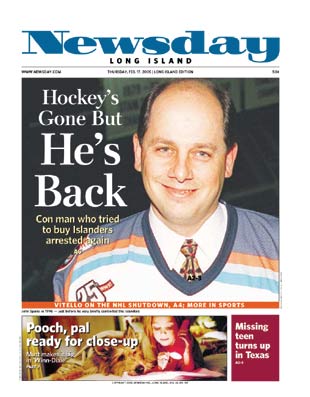 It's a very good read. If the Spano saga is somehow unfamiliar or foggy to you, here is a great rundown in the Dallas Observer from 12 years ago.

What bugs me most when people -- some perhaps too young to remember -- dismiss the "sad-sack" Islanders due to their last 15 years is that they have no idea what a succession of miserable ownerships can do to a club. Not to mention the cumulative effects on its still-passionate yet wounded fanbase.

I mean, Spano was an absolute fraud -- literally -- and the NHL allowed him control of the franchise! Put it another way: the only hockey-related consistency around the club through all that turmoil was Mike Milbury's influence on hockey operations.

It's been an uphill battle that's cost Charles Wang -- despite his flaws -- a lot of money to try and fix. But the Islanders have a very real chance of rising from the ashes and giving us a taste of how this club, this market, this fanbase can perform on a somewhat level playing field.

Before the next pundit writes the Islanders' umpteenth obituary, I'd ask that they first let the club seize that chance.