Share All sharing options for: Islanders Gameday: Tank Stand-off with the Leafs

First, an oldie but goodie: 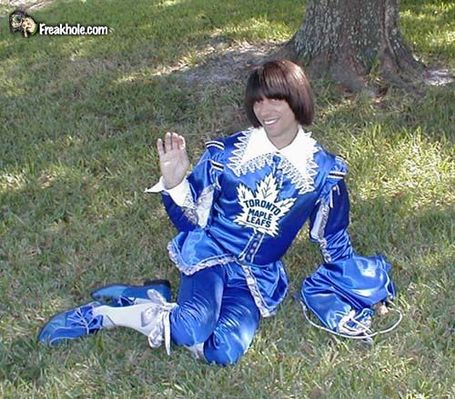 Maple Leafs fans can pray to St. Wendel until they're blue in the face.
They're still not getting John Tavares.

The Maple Leafs did us two favors last night: First, they handed the Rangers a shootout "loss" in Tortorella's debut. (Rangers decay is always funny.) Second, the Leafs "won" two points, pushing them ever further out of serious contention for 30th place. It's going to take some serious roster carnage for Brian Bluster Burke to push this team into an ideal lottery position.

We could talk about the game tonight, I suppose, but let's be honest: This is about two teams that can't "accidentally" lose fast enough. (Actually, the Islanders have so many guys still on the injury shelf, they're losing at a plenty fast rate, thanks.) But even if the Leafs can't get to the bottom, they can improve their position (currently 25th, three points above Ottawa at 27th) regarding the lottery.

Despite Burke's hilarious talk about not selling at the deadline and his patently insane price for Tomas Kaberle (Oh, yeah, Pronger = Kabrele, no question), I expect he will shed an asset or three by next Wednesday. Aside from Kaberle, Burke's pieces are either free agents or not exactly "sought" items (or both), so this is the crazy time when his spare parts could attract inflated value. In the sober sunlight of summer nobody this side of Cliff Fletcher is going to think, "Wow, whatever it takes, I must get Jamal Mayers!"

But, Bertuzzi contract be damned, Burke is no idiot. He knows talking a lot is good fodder, and misdirection through the media is a useful game. Set the price of your refuse pile high, then bargain down to a lower price someone will actually pay. People will remember the price received -- not the fact you pretended to demand a higher one a week earlier.

But oh alright, a bit about tonight's game:

In a Brendan Witt-like season of awful, Vesa Toskala has actually played better in goal lately. It's funny to hear Ron Wilson talk about how challenging Toskala and others helps them get it together -- while those players deny it. All employees need a kick in the bum every now and then. But as this is a back-to-back for both squads, we might not see Toskala anyway. For his health, we certainly shouldn't.

The Maple Leafs power play is actually a little better than the Islanders', which has suffered steadily since Mark Streit and Doug Weight started getting hurt. The Leafs penalty kill, however, is last in the league. Maybe tonight the Islanders get a shot on goal with the man advantage.

And of course, Leafs leading scorer Jason Blake returns, in the best form he's been in since he left the Island. I fully expect 7th Woman to be atwitter.

That's about all I got. If you're not at the game, come back later for the live game thread -- or maybe we'll head over to Pension Plan Puppets to drown lottery sorrows with that ribald gang.

And if you haven't heard: Begun, the Deadline has. Kunitz to Pittsburgh. Look for blogger reactions and comments from both sides at SBN's snazzy NHL Trade Deadline hub.