Islanders Gameday: Yay - I mean 'darn' - the Kings are okay

Share All sharing options for: Islanders Gameday: Yay - I mean 'darn' - the Kings are okay

You might remember the Los Angeles Kings as a team in perennial rebuilding, and you'd be right. But right now the Kings scare me*. In fact, right now they are what I hope the Islanders will be next year: A young, skilled team whose best assets are finally starting to come together. (Okay, that's asking a lot ... how about two years? Please?)

*assuming the traditional non-lottery stance of, 'Yes, I want my team to win.'

One reason the Western Conference playoff bubble is so ridiculously tight right now (see standings below) is that even the worst teams are starting to finally reap the rewards of several years of struggles. Count the Kings among them.

The Kings roster features young offensive talent like Anze Kopitar and Alexander Frolov, a prescient pick for captain in Dustin Brown, plus a not-half-bad return for Pavol Demitra in Patrick O'Sullivan. Oh, and apparently blueliner Drew Doughty is a stud. (Remember this before jumping if the Isles go with Hedman in June. No matter what, at some point the Islanders will need to add a cornerstone back there.)

The final key to the Kings' Turn Toward Respectability campaign came when their goaltending situation settled down with the emergence of Jonathan Quick, staunching years of Cloutier-like disaster (I mean, Barry Brust?!) at the position Roman Cechmanek could not conquer in a year.

The Purple-and-Gold-and-Silver-and-Black-and-Purple-and-WellokaymaybeSilver Again are romping on this road trip, which is supposedly lethal for West Coast teams. Most recently: a victory at The Rock in New Jersey. Granted, the Devils played their part in letting that happen, but somehow a lot of "good" teams have failed to show up to face the Kings this season, and the club of many different royal adornments has made those teams pay. Before that: beating the Capitals at their own game.

The Kings have ample motivation, too: They're not just making "a good showing" for a rebuilding club -- they're in the thick of a downright silly, 10 teams-in-five-points playoff race: 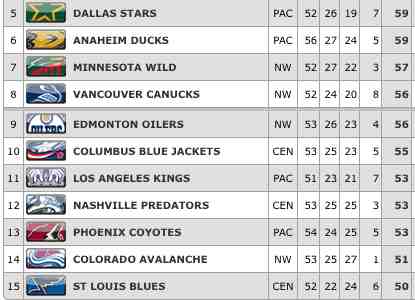