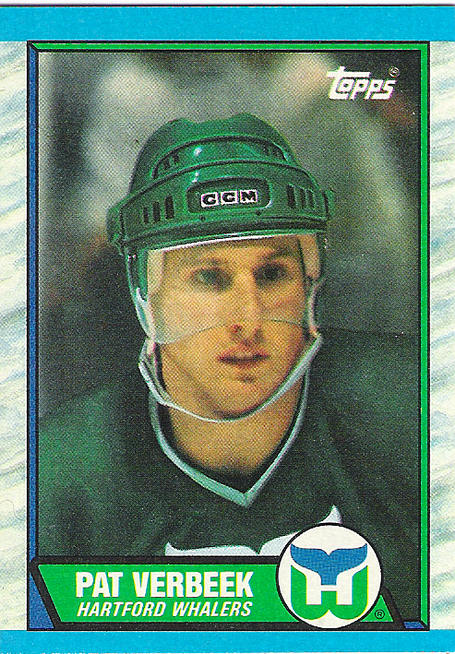 First, let's get this out of the way: I hated Pat Verbeek.

"Little Ball of Hate" is a cute nickname if you're a guard dog at Wal-Mart, maybe. Some kind of yappy chihuahua a spoiled celebrity carries in her purse. But for a hockey player? Kind of pathetic. Just sounds like a cheapshot tool with a temper. The kind of guy who would take a two-handed baseball slash to the back of the Lady Byng-like Pierre Turgeon's knee in the 1999 playoffs (Stars vs. Blues). That was Verbeek. [And trust me, that happened.]

Come to think of it, maybe that incident was Verbeek's way of executing a little ball of bitter vengeance at being traded by New Jersey for Pierre's brother Sylvain a decade earlier. In addition to frequent cheap shots, little balls of hate probably hold nonsensical grudges, too.

But anyway, this is about hockey cards, and the hilarious efforts to paint traded players in their new uniforms rather than going with the old "NOW WITH WHALERS" workaround.

Verbeek's first card for the Whalers was one of those cheap close-up paint-over jobs. Having been dealt by the Devils to the Whalers over the summer, his 1989-90 Topps card showed his little ball of helmet colored green -- but still CCM, mind you -- while they colored a little ball of green jersey on his shoulders, a white collar, and just the very tip-top white of the Whaler tail.

As regrettable little balls of pre-Photoshop jobs go, this one was actually passable. Certainly less noticeable -- if less ambitious -- than the Randy Cunneyworth epic from the same year. They did a lot of these close-up shortcuts, presumably because they were easy, the way ESPN -- does that network still exist? -- immediately slaps the image of a new hat on the head of a baseball player who signs with a new team. (Why the Orwellian rush to alter history? I don't know.) I'll never get why they didn't just leave the original image alone: Players get traded, big whoop. For some reason they had to act like they were pulling a fast one.

Kind of like Verbeek, every time he snuck a cheapshot in while the ref wasn't looking.