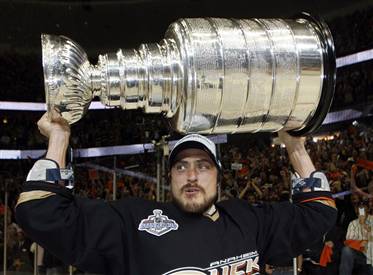 Former Ranger coach Tom Renney has called the Islanders "an excellent team, a playoff team". Is he right? Maybe. If our core can stay healthy, if what I call the Golden Line--Moulson--Tavares--Okposo--can stay golden, if we can get significant secondary scoring from a second line, our other two lines, and our defense, and if our goaltending stays solid, why not?

At the end of February, we will have 20 games left and a possible 40 points. Teams that go anywhere in the playoffs just about always have a March / April surge at .600 or better, so lets say we do even better and win at a .750 pace or 30 out of 40 points. You need 100 points to be assured of a playoff spot, so I figure we would need 70 points or more by the end of February to have a serious shot.

Given that we are a few pieces short of a championship core and that Garth needs for the 2010 draft to be very productive, how should he handle such a situation? Here is what my strategy would be.

Assume that the Ducks and the Bluejackets are fading at deadline time and decide to sell. Garth trades picks to the Ducks and gets Teemu Selanne and Nick Boynton. He trades Comeau and a pick to the Jackets for Raffi Torres. Then he takes steps to ensure a productive draft. He trades Andy and Marty to the Chicago Blackhawks for their first and second round picks. The Blackhawks need to shore up their goaltending for the playoffs and they need a tough physical defender who can score. This gets them that without putting them over the cap limit.

Garth then has a three team trade that sends Frans to Boston, Bergeron to Phoenix, and we get Boston's and Phoenix's lesser first rounders. Better yet, Phoenix sends its better pick to Boston and we get Boston's Toronto pick. Boston also gives us center prospect Carl Soderberg (http://www.hockeysfuture.com/prospects/carl_soderberg). This makes Phoenix more competitive and keeps Boston competitive with $4 mil plus in cap relief that will enable it to keep the rest of the core together for 2010-11.

Gordon goes with a three line strategy--Moulson--Tavares--Okposo, Bergenheim--Weight--Selanne, and Tambellini--Bailey--Hunter. All three lines get approximately equal playing time although maybe the top line is given somewhat more than the other two. The fourth line is Torres--Thompson--Jackman. Boynton fills Andy's spot and role on defense.

Let's say that Bergy is really inspired by playing on a line with his legendary countryman and the second line explodes. Roly, backed up by either DP or Mikko, sees the Cup that got away in 2006 in front of him and he is on fire. We finish with 100 points and in the 4th seed, face Buffalo, and blow through them in 5. Then we go against the Stanley Cup champion Pittsburgh Penguins and it gets real interesting. Could happen.

Could the Islanders be a playoff team this year?