Sorry to everyone -- but particularly to the recent K.C. visitors -- for not getting this second episode up sooner after the initial recap. Been a crazy month of travel for me, so working features into the middle of the regular Islanders news has been tough. [/ends whining]

Attending the preseason game in Kansas City was quite fun, opened my eyes to a few things, and cemented my impression that gauging a marginal market's readiness for pro hockey by counting its skeptical fanbase's attendance at a meaningless preseason game between two distant teams is, simply, fool's play.

Put it this way: What if an entertainment conglomerate told you to pay full price (until the day before the game, when prices were slashed) for an exhibition game between the half-rosters of two lottery teams based thousands of miles away -- and on top of it they told you your response will dictate whether a team relocates/expands to your city -- when you demonstrably know that not to be the case? If you're like me, despite my devotion to this sport, I'd seriously consider telling them to shove it up their puckhole. But if it was a different sport -- one I'd watch if we had a team to call our own, but not if said conglomerate was just trying to use me? Then I'd shove it up their puckhole myself.

In this context, I thought just under 10,000 on a Tuesday night was hardly "a miserable failure." That's not to say I think K.C. should have a team -- just that if you're arguing against it, there are far better reasons than an exhibition game.

Anyway, on to the experience...

If you based a city's readiness for hockey on the number of jerseys in the crowd for an exhibition game, then Kansas City looks like a freaking hotbed. I was kind of overwhelmed as I walked in. The number and variety of jerseys took me off-guard. After years of going to partisan games, I forgot that a neutral site game with unaffiliated teams -- despite AEG filling the "Team Store" kiosks with Kings gear -- would bring out all the neutrals in all their gear.

And man, was there gear. It would be quicker for me to mention the only two NHL jerseys I didn't see: Florida and Atlanta ... and that's it. Every other NHL team and several minor league (and fictitious) teams were represented. An Anaheim was there, so was Phoenix, so was Columbus, Nashville. These people represented. The most plentiful were Islanders, Kings, Blues and of course old K.C. Scouts jerseys, but not by much. I've never seen such a wide representation. With such a variety, your typical team tribalism was replaced by "Hey look: Hockey!" tribalism.

For the record, of the Isles jerseys I saw, there were a surprising number of Yashins. There was also lots of DiPietros, a LaFontaine (a guy I talked to while I scarfed down a hot dog -- sadly before I knew I'd be interviewing the real LaFontaine a week later), Guerin, Peca, Streit, Osgood, Bergeron(!), and even Linden. And of course, my own Bossy 22. I suspect the one in this picture was a Hunter, but I don't remember seeing him get up. 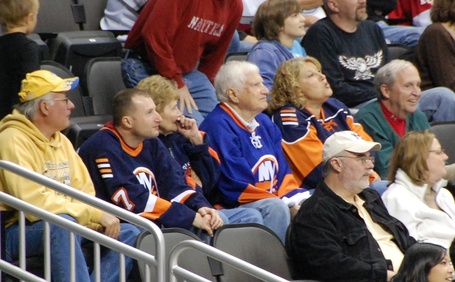 Flyin' the colors, representin' in K.C.

I also saw a guy in a Canadiens jersey #12 with HIS OWN NAME on it. Dude, no. That's Dickie Moore's. Leave it alone. No matter where you fall on when and how old you can be and still slap your name on a jersey, surely we can draw the line at putting your own nameplate over a retired number? Can't we at least establish that minimum standard?

Speaking of Phoenix, in the first period I sat next to a Coyotes fan (in full jersey and hat), one of the most curious fan profiles I've ever met. You know how we debate stuff and say "fans in _____ don't like..." yet we base it off our own subjective exposure to a select sample? Maybe even off a couple of online forums? [Ed. note: That said, everything you read at Lighthouse Hockey is gospel, A-B-C blackout.] Well, this guy drove that point home, both from a Coyotes perspective and a K.C. hockey fan perspective.

He was 56, from K.C., had lived in Phoenix and since moved back. He'd been to several Coyotes games, said he loved the atmosphere and the building when he was there -- and also asked me several basic questions like what the "A" on the front of the jerseys stands for, and whether any players make it from U.S. colleges.

Before you interject your "Ha! Southern market!" joke, he explained to me where he's coming from: He simply loves live sports. He doesn't watch any of them on TV, but put him at a hockey game or a basketball game, and he goes wild over the action.

He also didn't have promising things to say about the K.C. market: "It's gone downhill," he said. "We make St. Louis look like New York." [Note, as someone familiar with all three uh, "municipalities," I affirm for you that this is severe hyperbole. But you get his point.] "Basketball failed here, and people remember that." (Aside: That was even before the Scouts! Do they remember hockey's "failure"?)

Could hockey work in Kansas City? I asked him.

"I don't know. I'd love for it to," he said. "But they've led us on. They built this building and promised us a team. They've put us through the ringer. That guy Leiweke [of AEG], he's a K.C. native; he was supposed to make it happen. Now everyone's just really suspicious. Mario [Lemieux] came in to a king's welcome. He wined and dined with everybody, met everyone at City Hall -- then went back to Pittsburgh and got himself a deal. So everybody's just really suspicious." 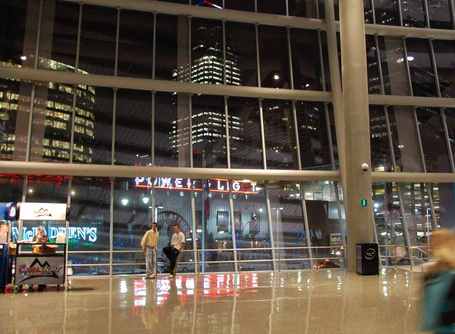 Pretty much every concourse view looks like this, out into the city. Plus: two dudes just chillin', wonderin' why the dork with the notebook in the Bossy jersey keeps snapping mundane photos.

The [telco of some sort] Center

The Sprint Center itself is awesome, as advertised. Wide concourses (hallelujah!), easy to get around, plenty of parking right next door for $10 -- though plenty of places to park on the street for free. Nicely located right off the Interstate and next to the city's cool, still-new Power and Light District. The concourses are pretty cool and look out into the city through the glass exterior that dominates all those photos of the place.

I was surprised by the lines for concessions and even for the bathroom on one occasion. For a new facility, I didn't expect that. I'd hope with a regular tenant they'd address that.

Oh, and the food: Damn, I forgot how much Kansas City tries to kill you with food. Barbecue is the specialty around town (although, in truth, traditions have spread so much you can find every style of BBQ throughout K.C., St. Louis, and Memphis and all points in between if you know where to look). The concession stands of course focused on BBQ along with your standard fare. I ordered what was billed as a 1/2-lb. hot dog topped with barbecue brisket. And curly fries. And sauce. Just looking at it made my arteries constrict. I couldn't finish it: The dog itself was alright -- and the size of my forearm, dwarfing my large beer -- but the brisket was sort of a poor representation of what K.C. BBQ has to offer. Beer choice was disappointing (Miller Lite, Coors, Bud Light); if they offer alternatives, I didn't find them. 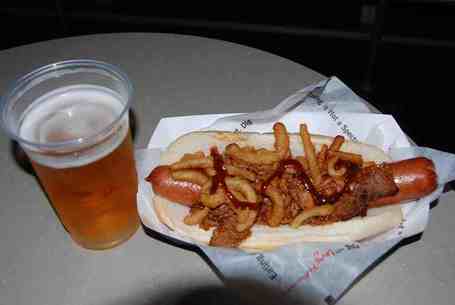 The Kansas City Diet will shorten your life expectancy by 15 to 25%.

Atmosphere: Do These Fans Know Jack?

Kidding. Different segments of fans cheered for one side or the other at their respective moments. The fights drew the loudest cheers, because nothing brings humans together like blood and violence. But considering there were so few fans who actually cared about either team -- and that these games always attract their share of disinterested free-loaders who get free tickets at the last minute -- it was a typically tame preseason crowd. I did hear my share of dumb questions and truly bizarre observations. ("Dad, can you elbow in hockey?" >> "Sure, that's legal.") But before you smear an entire city based on one comment, I have never attended a major league sporting event without hearing head-scratching exchanges.

I will say that since I was able to jump around during the game (You know this drill: You spot an empty 3 or 4 seats during play, remember the section/row and target it during the next period), I was surprised at how offended people were when I was in their seat. One guy just slapped me on the shoulder and pointed his thumb like he was kicking me out. (I was sitting next to the Islanders stick rack, but still: Dude, you're at a neutral site exhibition game. Both Westgarths are dressed. The unwashed masses have not soiled your elegant preseason experience.)

Another guy dismissively said, "See ya!" when he and his obnoxious crew of clueless preps and their lone woman returned half way through the second period to bump me out of an empty row. I didn't point out to him that my actual seat was five rows in front of his. (I'd moved back to get a line of hearing over the glass and to avoid stepping over 10 people to get back to my ticketed seat.) 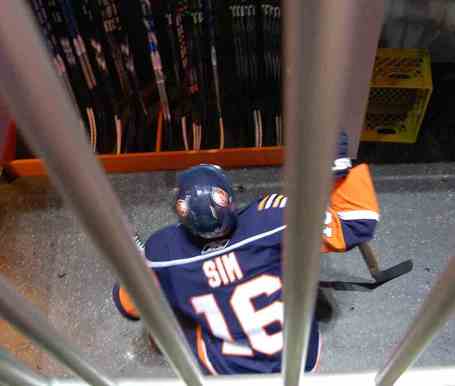 Views you get when you get there early: Jon Sim celebrating his escape from Gordon's doghouse.

The Show: We Have Lasers and a Jumbotron, Too

Being of a certain logo-and-jersey fixated orientation, I was mesmerized by the use of the old silver-and-black Dr. Dre/Gretzky-era Kings logo, though:

The Elephant in the Arena

I was focused on the crowd, the game, and getting to sit right behind the bench to watch Gordon and Chynoweth give out instructions, so I missed some things. But to my knowledge, there was very little mention of K.C.'s pursuit of an NHL franchise. The most notable thing I saw was during a break in play in the third period, during typical crowd shots and kiss-cam like distractions, they focused on this guy holding a Kansas City Islanders 2015 sign, to nominal applause. 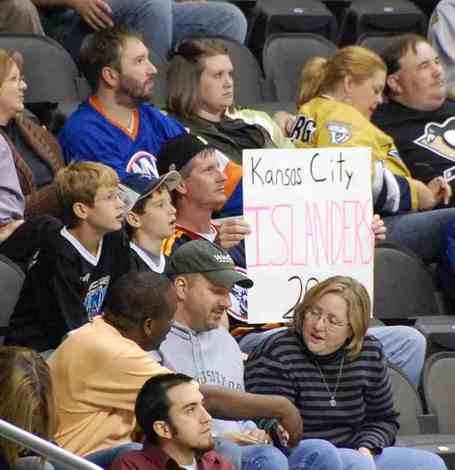 He was wearing a Scouts jersey, so he is forgiven his presumptuous nature and rudimentary mastery of fonts.

Is there more to say about the night? Probably. But I have tarried enough -- and now I'm focused on getting to the home opener as the real games begin.

Am I glad I went? You bet. Did it tell me whether the NHL could work on minimum, Nasvhille/Columbus standards in Kansas City? No. But I know that decision will be made by the cabal that runs this league; so if it ever happens, as long as it's not the Islanders, it'll make an excuse for a hockey road trip.