Breaking News Islanders TRADE: Bo for Beau (and Raty, and a 1st...)

With All-Star weekend upon us, it was tempting to pick someone like Bossy, Potvin or Trottier for this "Islanders of Yesteryear." But in light of the always-resurfacing fighting debate, I thought I'd go with an All-Star Game rep (1978) who typified "power forward" and also typified the "ideal" use for fighting in this game. 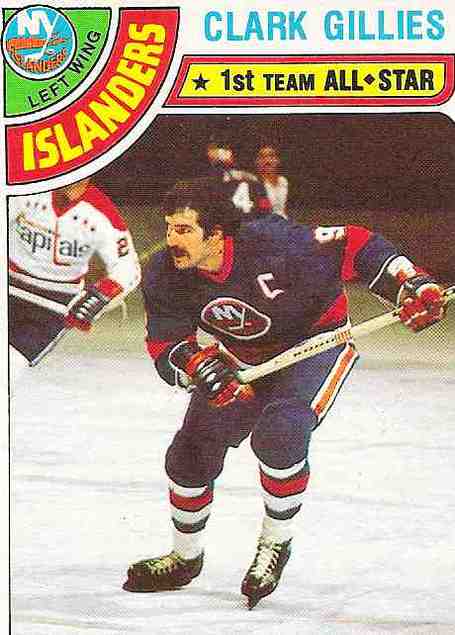 You see, Clark Gillies never liked to fight. Never seen an interview with him where he acted as if he enjoyed it -- on the contrary, he usually says something to the effect of: "I didn't like to do it, but sometimes it was necessary." Yet the back of his Topps 1978-79 trading card [pictured after the jump] calls him "one of the most respected fighters in the NHL." (I realize most "enforcers" today also would prefer not to fight, but they do so because it keeps them in the league -- which, incidentally, is a big reason they argue it's still "necessary." Gillies did not need to fight to stay in the NHL.)

Gillies' four-season stats at that time reveal 0 seasons with even 100 PIMs -- yet a four-season average at the time of about 32 goals per year. Granted, part of his reputation was earned in juniors, where he fought a whoooole lot. But Gillies never even eclipsed 99 PIMs in any of his 14 NHL seasons.

Wherever you fall in the fighting debate, there's no doubting that fighting's function has always been in part a violence-limiting psychological "release valve" -- a vague yet palpable role that is essentially an oxymoron. Violence for the sake of stopping violence? Does not compute. Except that sometimes it does, when tensions escalate quickly and heightened competitive juices push taking "liberties" too far, and someone calls timeout to put a lid on things and settle it one-on-one.

The fact that talented players like Gillies used to be reluctantly drawn into fighting to protect or "create space" for smaller yet higher skilled teammates shows us how ingrained this strange function is into the game. Yet the fact clubs ultimately decided players like Gillies were too valuable to lose to fighting injuries or major penalties explains how the league developed 300-PIM specialized goons as a fixture in every lineup.

Rest assured, when Gillies got into a fight, it was not sideshow sham like many pre-planned fights we see today. Maybe the advent of specialized enforcers does us a favor, by pointing out the absurdity of this "necessary" function. 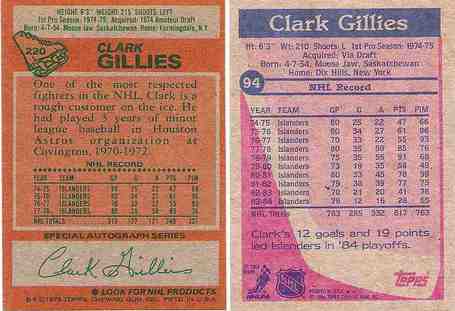 I rise to my feet like everyone else when an NHL fight begins -- but often I feel like I'm gawking at a circus or a carwreck (or both). It's hard to imagine this league without it, particularly with the popularity it brings and the fan bloodthirst it nourishes. But despite my reservations, when I look back at a player like Gillies, I'm better able to cognitively see its "policing" role.

An All-Star Worthy of the Retired #9

But this is supposed to be about Clark Gillies the player. And what a player he was. Opposing fans sometimes cite his stats and scoff at the Islanders retiring his number (though retired numbers are really no one's business but that club's and its fans'). I'm not going to touch the Hall of Fame debate, but his importance in Islanders history is irrefutable and makes him worthy of the permanent #9.

With the aforementioned toughness, he not only helped make Mike Bossy and Bryan Trottier's careers possible -- he was skilled enough to hang with them: Gillies was a good skater, a good shooter, a diligent defender and all-around smart hockey player. (He consistently sported one helluva moustache, too.) The presence of "secondary" players with his skill and diligence are what made the Islanders' four consecutive Cups and 19 consecutive playoff series wins possible.

It's indicative of the respect for Gillies that he succeeded original team captain Ed Westfall for two years just before the dynasty. He ultimately gave up the captaincy to Denis Potvin, as he said he never felt quite comfortable in the role (and perhaps figured Potvin might as well be captain, given Potvin's verbosity with or without the 'C').

The saddest moment of his career for me, following the Islanders from afar in a pre-Internet age, was discovering Clark Gillies was a New York Islander no more. Here's how I found out: 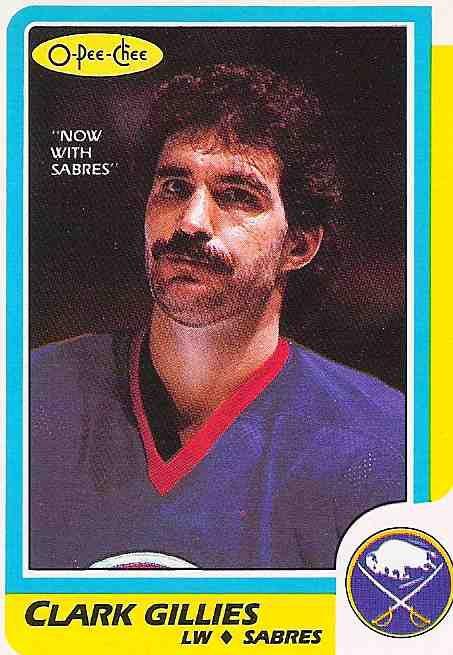 "Now With Sabres." Although the above pic (1986-87 OPC) was taken when Gillies was still an Islander, the facial expression seemed so fitting. For me, it always symbolically conveyed the exhaustion of so many playoff miles. The fatigue of so many Islanders' star careers winding down simultaneously. The disappointment of being left on waivers ... and claimed by the also-ran Sabres.

Gillies only lasted a little over one season in Buffalo before calling it quits. Like many Islanders greats, the dynasty years had taken their toll. All fans had left were the memories. 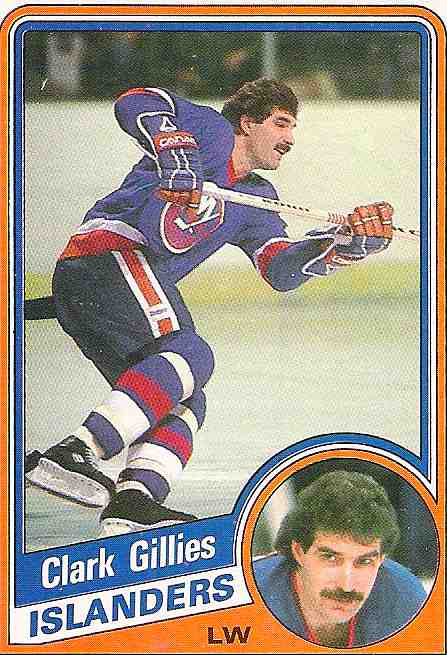 Note: Islanders of Yesteryear is an on-going series, loosely inspired by "Leaf of the Day" at Pension Plan Puppets. Although -- let's be honest -- there was no way I was starting an Islanders blog with all these SBN tools without digging into some hockey cards and storied figures from yesteryear. As with all content on this site, feel free to create and add your own in FanPosts, or add your own memories and thoughts in comments.