[Updated with amateur lunchtime cartoon at the end.]

The human capacity to find bright spots amid misery knows no bounds: The nice thing about an ugly losing streak is you know it will end some day. So might as well sit back, expect a loss every night and be pleasantly surprised when the Islanders turn up a win and force the opposing goalie to throw a hilarious fit.

This one was silly, and largely thanks to miraculous avian intervention. I mean, the Isles were outshot 40-14. And they're opponent still underachieved. And yet the Isles managed a win, to end another lengthy (8 games) losing streak and go into the All-Star break on a "high" note -- avoiding putting a "30" in the loss column until after the break.

The Ducks, for their part, started slow, never truly looked urgent despite the shot barrage, and never used their size and physical advantage to even ruffle a lone Islander feather. Just like Earl Sleek at Battle of California anticipated, over my woe-is-us protests.

The Islanders' faults were easily summed: The Islanders had effecative breakouts in the first and used two J.S. Giguere oopsies to nab a 2-0 lead -- but then promptly stopped pushing play at all for the final two-thirds of the game. This was a perfect example of why blocking a lot of shots is not a sustainable strategy for long-term success. It will steal you wins here and there, but if you're relying on blocking shots, you're just masking flaws -- like injuries, shallow depth, an inability to control the puck -- that require serious rehab work.

But the Islanders' bright spots, relative as they were, were tangible:

Kyle Okposo -- despite Giguere not covering the inside post -- located that PP one-timer in the exact spot you'd hope to beat a laterally moving goalie.

Likewise, Kurtis McLean's slapshot was stoppable but well-placed. And McLean created two other near-misses with his hustling drive to the net. To see a 28-year-old, Division III product make his NHL debut in front of family one night and then score his first NHL goal the next night on a slapshot streaking down the wing -- well, that's what hockey is all about, right there. I won't soon forget the look on McLean's face.

Yann Danis -- I have been among those dismissive of his qualities, but he does have solid abilities, and he showed them on this night. Square, poised -- and with the bit of post-friendly luck necessary for any goalie's big night. It was odd when Scott Gordon was so reluctant to use him to spell Joey MacDonald this season; now, with MacDonald on the shelf, it only makes sense to give Danis time to make the backup job a two-horse race.

Nate Thompson and Tim Jackman -- It's too tempting to fall in love with lunch-pail 3rd/4th liners like these. You start to talk yourself into keeping them, and before you know it you have six grinders you'd "hate" to let go while more talented unknowns sit in Bridgeport. Still, those two show responsibility, speed and tenacity and were largely responsible for sealing off the game. It doesn't hurt Jackman that he's our default enforcer of the moment. (And it didn't hurt him that no Ducks were interested in fighting tonight.)

Yeah, this isn't the stuff of stellar domination -- not even the stuff you'd expect to require to defeat the Ducks. But for a 30th-place team, on an eight-game losing streak, previously winless in 2009, and looking for a "high-note" send-off to the All-Star Break -- well, under those circumstances, it ain't half bad.

Note: The following is pathetic both as an imitation and as an homage to Earl Sleek's cartoons at Battle of California (which started innocently enough), but there you go. This is what happens when a one-trick writer steals a couple of minutes at a coworker's computer (one with actual design skills) over lunch and creates a rudimentary sketch laughable only in its amateurish execution [California is supposed to be wearing flip-flops -- and New York is apparently a bird, now that I look at it].

I feared so much a repeat of N.Y. getting mauled, that this just seemed like the right thing to do, with a New York twist of the Long Island. Sort of in the spirit of RudyKelly's etch-a-sketch riff, also at BoC. Granted, one team losing on consecutive nights in New York isn't even a "perfect" state sweep, but with infrequent visits there was no telling when I'd get this chance again. 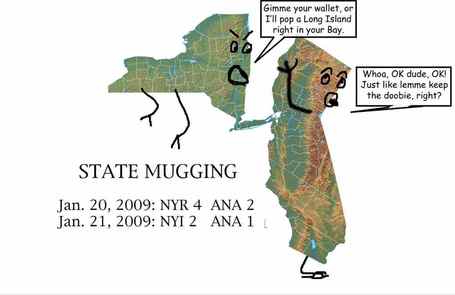