The NHL relocation story: Devil is in the details

Share All sharing options for: The NHL relocation story: Devil is in the details

[Updated: James Mirtle has more on this topic here. SBN-affiliated Coyotes blog Five for Howling has an impassioned take on this and past Coyotes coverage coming out of Toronto.]

Stu Hackel at the NYT blog "Slap Shot" posts a great perspective on the Globe and Mail's recent bloody (literally) investigation of the financial situation and commitments of the Coyotes ownership.

Hackel recaps the G&M reports and expands on some of the associated commentary, poking holes in the simplified meme held in some circles that all of the NHL's problems and franchise moves can be attributed to a misguided equation that goes something like this:

There's so much more to the story than those simplifications, as Hackel refreshingly explores.

I won't even quote any one part of it, because it's filled with so many layers, and the significance of any one layer can be debated. Just read Hackel's post (and comments) for a refresher.

This is not to rip the extensive investigative legwork that went into the Globe and Mail's significant reporting -- rather, it's a note of admiration for Hackel demonstrating that there is no single villain in this story. NHL owners -- and players too, as Hackel explains -- have simply chased the dollar wherever it looked most promising, which often includes the unfortunate sports-wide phenomenon of getting elected leaders to put tax money toward stadiums. Fans, following the needle of addiction, have gone along for the ride. (The alternative: Quit? We can't quit.)

Granted, Bettman is hardly an angel and hardly free from blame. And he's the league figurehead, so part of his job is in fact to take those lumps for the often shadowy, rotating cast of owners he was hired to defend and prevent from cannibalizing one other. But if you think Bettman is the source of all southward franchise movement and ills, then -- just as if you think he's behind the reduction in fighting -- you don't remember John Ziegler and the '80s. 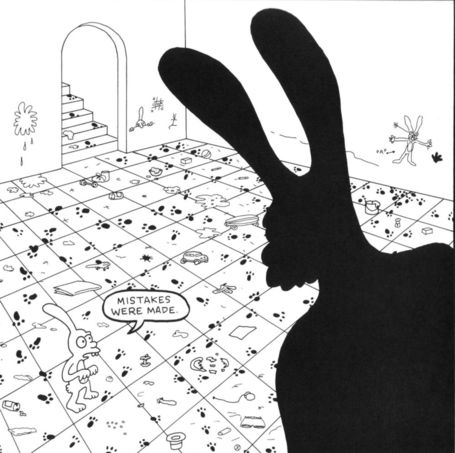 No, this is a collective story, with constantly rotating characters. There are so many more individual factors, near-misses, good bets-gone-bad, and money grabs to explain how each NHL club got to where it stands on Jan. 12, 2009. As Hackel explains, even the Coyotes would be in another, better position in Phoenix if not for some regrettable decisions by previous owners.

Maybe I'm giving undo weight to online chatter (and to the columnists who trade in lowest common denominator copy), but in this era of "with us or against us" politics, people sometimes appear so uncomfortable with ambiguity and complexity that they'd prefer to just sit on a simple narrative and stick to it rather than open up to new perceptions.

It's a human trait; it's shorthand, choosing summary over depth when other issues are more important -- and that's fine. It just does nothing to advance a conversation that has taken a deeper turn than the average game thread or chat banter (which also have their place -- don't get me wrong: I can B.S. and idly crack bad jokes with the best worst of them, but context is everything).

I don't mean to be so silly as to complain that "fans" -- and the columnists who incite them -- often act, well, fanatical. After all, we ask our beat writers, columnists and bloggers to play different yet often overlapping roles, from informer to analyst, humorist to agitator. It's just refreshing when someone takes a popularly cited issue and actually digs into its history and multiple root causes, instead of repeating the easy theme that makes for concise copy.

To take one example closer to home, even Mike Milbury had mitigating circumstances for some of his controversial decisions. That doesn't mean Milbury is innocent, of course -- heavens, no. Only that, if you truly want to understand how the New York Islanders got to where they are today, most serious Islanders fans will tell you the story involves way more than just one idiot who was missed by his village.

Sorry for the rant. Sometimes it's just nice to hear ... "the rest of the story."