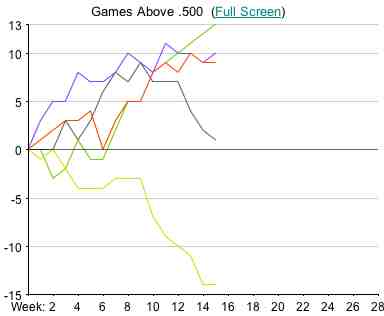 I love the site SportsClubStats because its team-over-time graphs remind me of the color-coded graphs my father and I used to make to chart NHL standings way back when, in the era when only one NHL team (justifiably) wore primarily black. (I'm a sucker for anything that gives me a little nostalgia for how this sport first got its hooks in me.)

But I haven't surfed there recently because, heh, frankly this season was never going to be about the Islanders' chances at the playoffs -- at least not for long.

I was reminded of SportsClubStats by following a link from the latest avian SBN hockey blog, Bird Watchers Anonymous, which moved over from "Do Thrashers Have Large Talons?" -- a longstanding Thrashers blog written by the excellent Falconer. (Stop by and check out The Falconer's new digs.)

Anyway, a look at the Atlantic Division chart for "chances of making the playoffs" is kind of funny (and sad). The Islanders' chances of making the playoffs are now calculated at 0.3 percent. That is not a decimal error. But of course they won't be mathematically eliminated for quite a while now. So their "chances graph" has plummeted to near-zero and will stay there, flatlining until elimination day, unless they go on a ten-game win streak -- which even then would not nudge it much, as that would put them at 48 pts., one more than what 8th-place Carolina has today.

Note also the drop the Penguins have suffered -- the original reason for Bird Watchers Anonymous' link -- by dropping seven of their last eight games.

[Note: The chart pictured in this post tracks games above and below .500. I think you can guess which line represents the Islanders.]