"They may think we're targeting the Islanders. But we take each incident as separate, even if the fans and the general managers feel like there's a connection."

He's right. Many Islanders fans think there is a direct bias. I myself do not. I do think there could be an unconscious bias -- in the sense that it's easier to make bold decisions and "make examples" that enrage only a quasi-"small market" team's fans and media on Long Island, rather than decisions that enrage all of Canada and its media. (Islander Thomas Pock's suspension was such an example ... an example not followed one week later.)

But bias isn't my concern here. My concern is that we never, ever know what a suspension will be nor why. Specifically, my concern begins with this: "We take each incident as separate, even if [every one else in the known universe] feels like there's a connection." 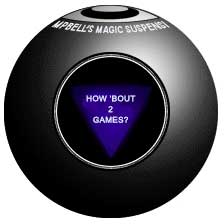 Maybe that's the problem. The NHL Circus Office of Mysterious Disciplinary Action wakes up each day with a new standard. They "take each incident as separate," so no one -- not fans watching, not players doing the would-be hurting, not coaches doing the "go get him" inciting, not GMs doing the calling up of replacements for injured/suspended players -- no one knows what is proper, nor what the consequences of a particular act of carelessness or revenge will entail.

Why? Because there is no set policy, no set list of consequences, no set of no-nos, Big No-Nos, and Absolutely Never-Evers. It's futile to look at past incidents (and punishments) as a guide because "each incident is separate." As with life, an NHLer's disciplinary fate is in the hands of unseen forces.

Hard to toe the line when you don't know where the line is drawn.

If Campbell and his crew make these decisions by themselves, why not explain the concerns and guides that go into each decision? They could come up with a check list of dangers and conditions that influence their thinking. They could even go through the angles of the hit and publicly discuss their perceptions, like Islander Outsider did here.

Ah, but information? That's not how the NHL rolls.

It's no wonder some players act like there are no consequences: Sometimes there are in fact consequences, but who can guess what they will be? The week Nielsen was hit, apparently a league memo went out noting that hits to the head would be watched. Intended hits to the head (and neck, and chin) that barely miss? Not so much.

Which results in the following collection of "each is separate" incidents:

"It was a tough one and we beat ourselves up about it all night," Campbell told Newsday on Monday morning. "We had 8-to-10 guys look at it, and after the hearing [Saturday morning], we took a couple extra hours to talk about it."

What does this mean, exactly? I am thrilled that Campbell and crew talked about it a lot. That's great -- even part of the job, you might say. The apparent agony of the decision warms my heart. But what did they discuss over these many hours? What standards (if any) are in play to guide their decision? What was said at the hearing? If "every incident is separate," what is the evidence-in-a-vacuum that determines any wrong, and how much punishment that wrong deserves?

Pock was contrite immediately following his hit; must've made it easy on the league. Mottau, on the other hand, was laughing in the penalty box, and later said, "If he didn't twist his knee up, he would have been fine." (No, buddy. If he didn't duck -- which twisted his knee up -- he'd have been out cold.)

This is yet another area where the NHL's lack of explicit communication with its constituents does everyone a disservice -- Campbell's reputation included. They could establish a thorough policy on acceptable checking tactics and acceptable evasive maneuvers (e.g. Is it OK to duck when a guy tries to take your head off? Is it OK to turn your face to the boards to ensure that if an incoming checker hits you, he's illegally hitting you from behind? Is it OK to line someone up from a zone away and, upon arrival, get your elbows up -- as long as your elbow misses? We fans generally don't think so, but the message from the league is muddy as usual).

They could release an explicit rendition of their suspension decisions, and how they're made. Instead we get this, to a Newsday columnist:

"It just wasn't a flagrant elbow to the head, the way the Pock one was."

Gee, thanks! The official NHL release says he was suspended "for an incident that took place during NHL Game #280 last night against the New York Islanders." That's it.

Apparently -- now we don't know this, because even though Campbell commented on this incident, "we take each incident as separate" -- it matters that Pock's elbow caused a direct head injury, whereas Mottau's direct attempted elbow did not cause a direct head injury. Never mind that Frans Nielsen probably avoided the head injury by leaning back -- and that duck/lean back was part of the process that caused 2-3 months' worth of leg injuries.

Until next time, when it just might be different. Or not. Make sense?