Portrait of the Coach as a Young Man

Share All sharing options for: Portrait of the Coach as a Young Man

Back in that innocent, transitional time when hockey trading cards still came with bubble gum, new companies joined the game to turn our larks into another cold, heartless quick buck. But for a while there, while different companies tried different gimmicks ("Ooh! A hologram!") to gain traction, it was quite a ball.

Pro Set's strategy revolved around quantity, but they had a nice product with some fun gimmicks. One was cards for coaches, something I thought was long overdue but which sadly never caught on (I guess a guy in a suit isn't as appealing as a rotund manager in a baseball uniform). Thankfully, Al Arbour was back with the Isles long enough to have his own place in trading card history.

Another fun thing from Pro Set was their "Series II" within a season that went way beyond (again, in quantity) what other companies included in their batch of late-traded players. These series included the infamous coaches' cards but also pretty much any traded vet or new youngster they could get a shot of.

Sometimes that youngster was a future star whose free agent status would dominate NHL talk in summer 2008 (oh, *sniff* he was so young)... 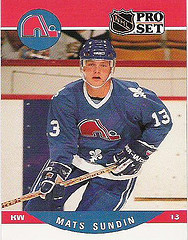 ...and sometimes, he was just a backup goalie and future promising young coach who would get his first big shot in 2008 (*sniff* oh, the Nordiques were so bad then): 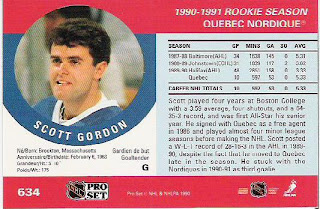